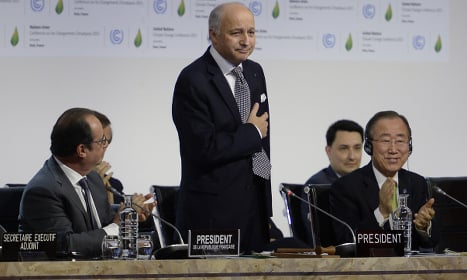 Foreign Minister Laurent Fabius, on the brink of tears after presiding over nearly a fortnight of talks in Paris that ran into overtime despite all-night negotiations, delivered the accord to ministers who must now decide whether or not to approve it.

“The world is holding its breath and counting on all of us,” said Fabius, his voice occasionally breaking with emotion.

Describing it as “an historic accord”, Fabius said the agreement would aim to limit warming of the planet since the Industrial Revolution to “well” below 2.0 degrees Celsius (3.6 Fahrenheit) and strive for an even more ambitious goal of 1.5C (2.7F).

The deal would also mean mobilising a minimum of $100 billion (92 billion euros) a year from 2020 to help the developing world cope with global warming, he said.

Importantly, a new figure for the financing would be set by 2025, Fabius said.

Fabius said the overall agreement would be “legally binding”.

Observers said that as the draft document had yet to be unveiled, it was not immediately clear if the financing would be a legal commitment, which the United States had been resisting.

“The end is in sight. Let's now finish the job. The world is watching. Millions of people depend on your wisdom.”