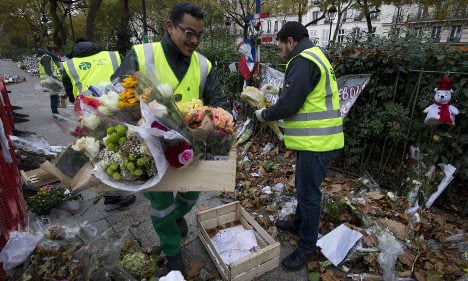 Workmen gather up objects from the Bataclan memorial. Photo: AFP
Bags are searched during mundane grocery shopping, heavily armed police patrol the streets, and Parisians are likely to be told to open their coats for security guards at the cinemas.
Meanwhile, bomb disposal teams are frequently called to examine “suspect packages”, so many of which are being reported across the city that Paris rail workers went on strike on Thursday citing security concerns.

There is enforced security in many office buildings – including that of The Local – and the messages of solidarity sprayed around Paris look set to stay for a long time.
At a theatre performance in the tenth arrondissement on Thursday night, viewers were warned not to panic during the simulated gunfire in the first act.
Yes, this is France at “war” against Isis, as a visibly shaken President Francois Hollande said soon after cafe terraces and a concert hall became scenes of carnage on November 13th.
The fading photographs tucked in among the shrines of candles and flowers show just how many youthful faces were among the 130 victims that lost their lives while enjoying a night out.
Outside the Bataclan music venue on Friday, workmen scooped up piles of wilted flowers, as even the deep mourning over the attacks must eventually end. At the Bataclan, workmen collect objects from the memorials, which will be kept for an exhibit in the city archives. Photo: AFP
The tourist trade is recovering in the world's most visited city, but the attacks have left their mark on its residents in a multitude of ways.
“I really pay attention now to people who get on the train with bags,” said Pierre Breard, 24, who works for a start-up in Paris.
“I look at people's stomachs” for signs they are wearing explosive vests, admitted Aurelie Martin, a 24-year-old primary school teacher.
On the night of the attacks, she was forced to file out of the Stade de France with her hands in the air as police frantically searched for more suicide bombers after three blew themselves up outside while France played Germany in a football match.
Meanwhile, in the eastern “hipster” district of the capital where the gunmen struck, posters in restaurant windows direct traumatized residents to counselling services.
In an upmarket delicatessen, a pot of orchids is all that remains of the tributes to Chloe, 25, who worked there and was killed at one of the bars sprayed with bullets.
'France's 9/11'
One bar, A La Bonne Biere, has defiantly re-opened, its shattered glass replaced and a fresh coat of paint added, but all the other restaurants and cafes hit on November 13 remain shut.
“We wanted to show them (the gunmen) that we're stronger than them,” said A La Bonne Biere's manager Audrey Bily.

The bar re-opened to crowds of locals and media, with the slogan 'Je suis en terrasse' hanging above. Photo: AFP
While victims' families are asking how this could have happened, the families of the attackers are sometimes left pondering the same question.
When investigators revealed the identity of the third Bataclan attacker on Wednesday, the father of 23-year-old Foued Mohamed-Aggad from Strasbourg did not mince his words.
“I would have killed him myself beforehand,” his father, Said Mohamed-Aggad, told AFP.
City authorities meanwhile are still puzzling over what to do with the attackers' remains.
It is easy to forget that Paris was targeted twice this year.
In January, a pair of brothers wielding rifles burst into the offices of the satirical newspaper Charlie Hebdo and shot dead cartoonists they accused of depicting the Prophet Mohammed. A policewoman was also killed and four shoppers were murdered in a Jewish supermarket, leaving a total of 17 dead in what some observers called “France's 9/11”.
Ten months later, the expression was used again – Hollande imposed a rare state of emergency and France stepped up its bombing of IS in Syria. It has tried to persuade its allies to do the same, with limited success.