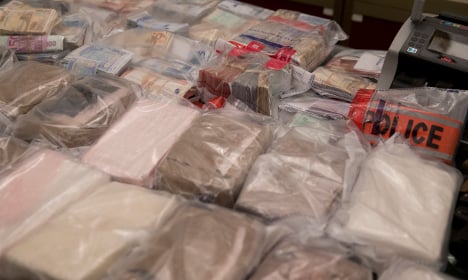 The massive haul was made in Boulogne-sur-Mer. File photo: AFP

2.4 tonnes of cocaine was seized by customs officials on Thursday in Boulogne-sur-Mer, Le Figaro reported, citing government and judiciary sources.

The drugs were brought in a ship travelling from Colombia and destined for Gdansk in Poland.

This is a record amount in metropolitan France.

“The ship was intercepted on Thursday at 18:30 in the open sea and was brought to the docks in Boulogne-Sur-Mer where the search operation began. The drug was hidden behind a metal partition,” said Finance Minister Michel Sapin.

Sapin said that the coastguard of the French customs office called the haul “the most important ever carried out in metropolitcan France to date”.

According to Sapin's statement, the drug's illicit cargo had a value of up to 50 million euros.

The prosecutor's office in Lille told AFP that the 75-metre-long boat took “quite a long time to search,” adding that their main concern was “not to miss anything”.

The 12 members of the ship's crew, who are Turkish and Ukrainian, have been detained.