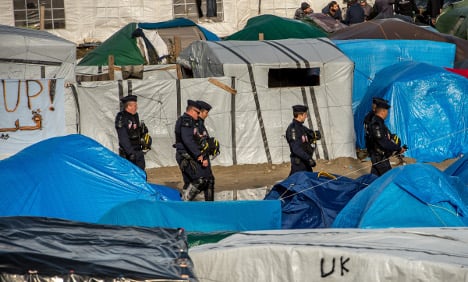 Police in New Jungle in Calais. File photo: AFP
Eighteen people were tried by a court in the city of Rennes for pocketing hefty sums to smuggle at least 127 Albanian migrants into England in 2012.
The leaders included Albanian, Kosovan and French nationals.
A group of sailors, mainly from the northwestern region of Brittany, received terms ranging from six months suspended to an 18-month custodial sentence for their role in the crossings.
The migrants were taken across the water in speedboats and yachts, with around 16 such sailings taking place from ports in the north and west of France.
Investigators said the migrants were forced to pay up to €20,000 ($22,000) per family for the trip.
The affair came to light in January 2013, when officials discovered 14 Albanians without British visas on a yacht that had set out from Cherbourg.
Two of the five leaders of the syndicate, who also received fines of up to €150,000, were convicted in absentia. French authorities have launched warrants for their arrest.