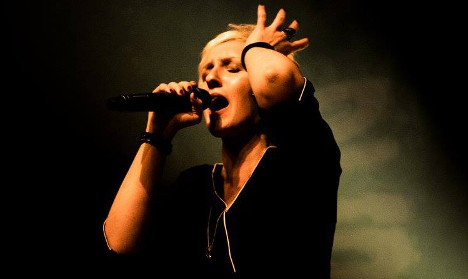 Laura Croix performing with her band The Traps. Photo: The Traps/Facebook

Laura Croix, a 31-year-old singer in a rock band, was hit by six bullets in the November 13th attacks at the Bataclan concert hall.

And this week, almost a full month since the shootings, she spoke her first words.

“She asked me if I was OK, and if her dad was OK too,” the mother told La Voix du Nord newspaper.

Although Croix is now conscious, speaking proves difficult and she mostly communicates by blinking.

The woman was hit by six Kalashnikov bullets, three in the chest and three in the abdomen. She was severely wounded and lost two fingers from her left hand, and fractured her arm and hip.

Shrapnel from the bullet was lodged between her lung and heart, and she has undergone seven operations. She was put in a medically-induced coma for the first two weeks of recovery.

Every other day, the survivor is taken back to the operating theatre to have her dressings cleaned in order to avoid infections.

Her mother and brother have been regular visitors to her bedside at the Georges Pompidou hospital in Paris.

“I think that I am still in shock… I'm not myself. Some evenings, I go to bed and I can't breathe,” her brother said.

Her mother, Danielle, has thanked the mayor of her local Trith-Saint-Léger in northern France for providing her with a car and driver to help make visits easier.

An anonymous donor also sent a letter to the hospital, offering the family the use of two rooms in an apartment during their visits.

“It gives us a lot of comfort, all these people who help us, and it's true that it does a lot of good,” the mother told BFM TV.

She added that she hoped her daughter would be able to rejoin her band, The Traps, at some point.

“I would really like her to be able to forget all the atrocities and go back on stage one day.”

“We only talk about nice things,” she added.