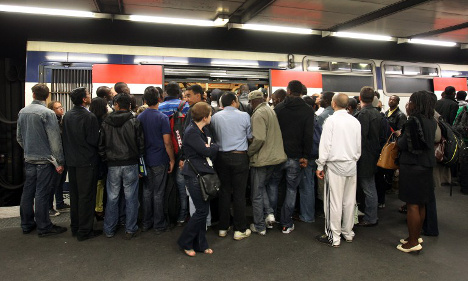 Passengers try to get onto a packed RER train during a strike earlier this year. Photo: Thomas Samson/AFP

Traffic was “severely disrupted” on Thursday morning on line A of the RER, due to a strike called by several transport unions which began at 3am and is set to continue until 6:30 on Friday morning.

Jacques Eliez, general secretary of the CGT union, told AFP that “the directives to protect the zones where a suspicious package is found are not being respected. Some suitcases left on the platforms are opened without informing the police.”

According to Paris transport chiefs RATP, reports of suspicious packages had multiplied by four since the November 13th attacks in Paris.

People in Paris and indeed France remain on edge as the national state of emergency is set to begin its second month, introduced just days after the terror attacks saw 130 killed.

The RATP announced that only one in four of their RER A scheduled trains would be running on Thursday, increasing to one in two during rush hour.

The network of trains travelling to and from Cergy-Le Haut would be served by one train every ten minutes during rush hour, whilst the Gare de Poissy will be served only by SNCF line J trains.

The statement added: “Service will be increased on lines 1 and 14 of the Metro.”

Line A of the RER is used by around 1.2 million passengers each day.

If you want to avoid potential delays, why not check this metro map to see if it would be quicker for you to walk? But be warned, walking times between stations on the RER A can be over an hour long, according to the map.