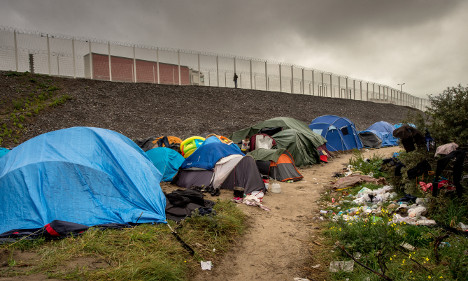 Around 4,500 migrants live at the New Jungle camp in northern France's Calais. Photo: AFP
Eighteen people are on trial in the western city of Rennes accused of pocketing hefty sums to smuggle at least 127 Albanian migrants into England.
In her closing arguments Wednesday, public prosecutor Anne Fourmel accused the defendants of “exploiting human misery” by demanding up to €20,000 ($22,000) per family to help migrants “reach El Dorado in Britain”. For a single migrant, the fee was around €6,000, she said.
The migrants were taken across the water in speedboats and yachts, with around 16 such crossings from ports in the north and west of France recorded in 2012, an investigation found.
The prosecutor requested the stiffest sentence for Edmond Rapi, an Albanian accused of playing a “major role” in setting up the Brittany-based network.
She requested a similar sentence of seven years jail and a fine of €150,000 for a Kosovan who goes by Bujar Curri as well as a man presented as the French lynchpin in the operation, Philippe Collin.
Collin denies having profited from the smuggling.
A group of skippers, mostly young Bretons, also face prison terms for transporting the migrants.
Two people implicated in the affair have committed suicide since the investigation began — a sailor and a woman said to have been involved in organising the crossings.
In a separate case, a young French fisherman was arrested last month on suspicion of also helping migrants cross the Channel.
The suspect was caught red-handed, on shore, while preparing an inflatable Zodiac boat for the voyage, police said.
Seven other people, including Vietnamese and Albanian nationals were arrested for their suspected role in the operation.