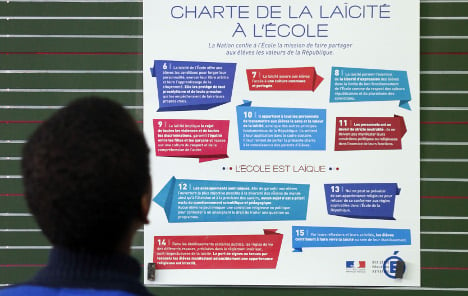 A child looks at the chart on secularism in school on December 9, 2014 at the Louis Aragon school in the northern Paris suburb of Pantin on National Secularism Day. Photo: AFP

French schools were encouraged to celebrate a national “Day of Secularism (Laïcité)” on Wednesday, but the initiative was widely ignored amid ongoing security concerns and the fact that many lament the fact that the principle or at least the term has been hijacked by the far-right.

Laïcité—a term meaning secularism —has been a central principle of the French Republic since a 1905 law that enforced the strict separation of church and state.

The law was originally established in order to purge Catholic influence from French institutions, but laïcité means a very different thing in the more multi-cultural France of 2015.

Hollande wanted it celebrated in French schools as part of a ten-point plan to combat radicalization by educating young people about the significance of secularism in France.

On Wednesday schools were asked to organize debates and activities about the meaning and history of laïcité. However many teachers were unwilling to participate.

“This is coming at the worst possible time,” said Pierre Favre, President of the French National Teachers Union, to Europe1.

“We are very focused on security. The prime minister and the president say we’re at war, that we’re in a state of emergency, but they still want us to organize a day of debates?”

On Wednesday The Local spoke to secondary school pupils in Paris's 19th arrondissement, who said none of their teachers had even mentioned the Day of Laicité, much less organized special activities.

Several pupils said they had never discussed laicité outside of back-to-school assemblies where they are told what they can and cannot wear, referring to restrictions on expressing religious identity in schools. One 14-year-old student said she wished her school would talk about the ideas behind laïcité, instead of just the rules.

“We have to live to together in a world where different religions are represented. This concept is really important to understand.”

But it appears that secularism is still a principle most French people are still deeply attached to.

Despite the sense that secularism is important for fighting radicalism, French people’s relationship to the term has grown increasingly complicated.  In recent years, laïcité has frequently been hijacked by right-wing politicians as an excuse to stigmatize minorities and police the expression of Islam.

Marine Le Pen and other far-right leaders have used the principal of laïcité as a pretext for critisizing pork-free options in school cafeterias.

Her niece Marion Marechal-Le Pen, a hardline Catholic, has promised to scrap alternative lunch options for Muslim and Jewish students across the Provence-Alpes-Côte d’Azur region if she wins in the regional elections on Sunday.

She has also stated that Muslims in France could not occupy the same rank as Christians.

Laïcité originally meant that the state recognized no religion, but has evolved to a more restrictive definition that implies that French people should not display or talk about their religion in the public sphere.

The principal was cited as the primary reason for a 2004 law banning students from wearing religious symbols—notably the hijab—in school and then again in 2010 for the so-called burqa-ban, even though critics accused the then governments of using it as a ruse just to limit the expression of Islam.

“The far right has twisted laicité and used it to violently attack the Muslims of France. They’ve used it as a tool to exclude, reject, and sow hate and division.”  said Prime Minister Manual Valls in a speech Wednesday.

“But laïcité is against divisiveness. Laïcité is our organizing principle of tolerance, of respecting each other’s beliefs and individual dignities.”