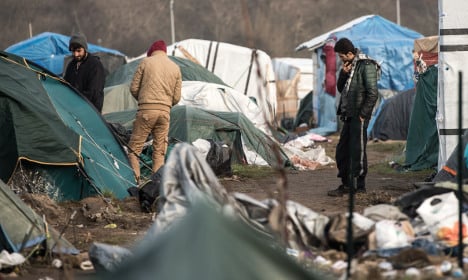 Men stand outside a tent at the migrant camp known as the "Jungle" in Calais on December 7, 2015.
“It is clear that the control of common external borders should be rapidly reinforced,” said interior ministers Bernard Cazeneuve and Thomas de Maiziere in the letter, dated December 3, calling for a “substantial reinforcement” of  the EU's Frontex border agency.
The ministers said Frontex should be able to call on “rapid intervention forces” in emergencies, and have access to EU security databases.
It may also need to carry out missions in countries outside the EU where necessary.
Germany announced this week that it has welcomed around 960,000 asylum seekers so far in 2015.
“We very strongly reject confusing migrants for terrorists,” the ministers said.
The migrant crisis has become an even more polarising issue since two of the jihadists that attacked Paris last month were found to have used the refugee route to enter the continent.
Experts say this may have been deliberately done to provoke animosity against migrants, but it has been seized upon by far-right parties such as France's National Front (FN), which saw record results in regional elections on Sunday.
The two ministers also criticised the slow pace of building arrival centres for refugees, calling for them to be operational “without the least delay”.