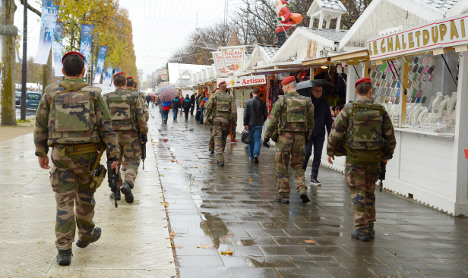 Soldiers at the Christmas markets at the Champs-Elysees in Paris. Photo: AFP
The French central bank said it was now expecting 0.3 percent growth in the fourth quarter, against 0.4 percent previously.
A cut of 0.1 percentage points in growth represents around €500 million ($543 million) in economic activity, according to an estimate by the French Treasury.
“Activity in services rose at a more moderate pace than in previous months,” the Bank of France said in a statement.
The impact was biggest on hotels, restaurants and leisure activities, which “notably weakened in connection with the November 13 attacks”.
Business services, meanwhile, continued to grow.
Corporate leaders were reporting an overall rise in activity in the month of December, the bank said, but industrial production growth was slowing down from November, and prices weakened, it said.
The bank reaffirmed last week its forecast for the French economy to grow by 1.2 percent overall in 2015.