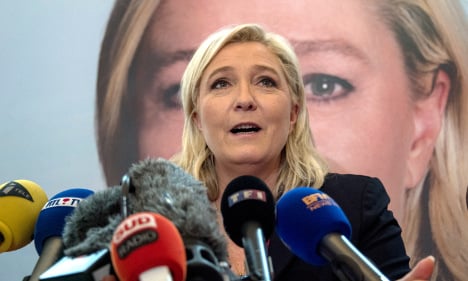 Marine Le Pen. Photo: AFP
The National Front took nearly 28 percent of the national votes in the first round of the regional elections on Sunday and topped the polls in six of the country's 13 regions.
They look set to win control of  at least two regions in the second round of voting on Sunday.
But the Representative Council of Jewish Institutions in France (CRIF) and the country's chief Rabbi are calling on the nation's Jewish community to help stop the party in its tracks.
It called on Monday for people to vote to block what it referred to as a “populist and xenophobic party”, warning “not to let the Republic give way in face of threats.”
Meanwhile, France's chief rabbi, Haim Korsia, called for a “civic uprising” of voters in the second round “to breathe life into democracy… in these particularly troubled times for the nation”.
The National Front has a long history of showing anti-Semitic sentiment, with party founder Jean-Marie Le Pen repeatedly saying in interviews that Nazi gas chambers were merely a “detail” of history.
As well as the ongoing economic crisis it is the National Front's party's anti-EU and anti-immigrant narrative that have acted as the lightning rod for many voters who have lost faith in mainstream parties.
Its repeated linking of immigration with terrorism has also helped it climb in the polls since the gun and suicide bombing assaults in Paris.
'This is a party that promotes hate'
When it emerged that at least two of the attackers had entered Europe posing as migrants, the party aggressively pushed a message of “we told you so”.
While Jewish groups are openly campaigning against the National Front, there has yet not been a similar call for France's Muslim community, which has often been riled by Marine Le Pen's anti-Islam rhetoric.
But Mohammed Mraizika, the secretary general of the Union of France's Mosques, told The Local that a call may yet come to halt a party that has regularly targeted France's Muslims.
“This is a party that promotes hate and works to divide people,” he said.
“It plays on people's fears and uses these fears to win the votes of worried people – and there are many worried people in France right now, especially on the subject of Islam after the terror attacks.”
He added that the situation was “a lot more complex” than just one of race and religion, noting that many voters had likely turned to the National Front looking for more concrete efforts to save France's suffering economics and high unemployment.
Women's right's organisations have also joined the chorus of appeals for voters to unite against the National Front on Sunday.
The organisation Osez le Feminisme wants voters to “mobilise to block the enemy of women's rights”.
“The representatives of the National Front don't only want to put an end to the advances made for equality between men and women but target the achievements made by feminists over  the years,” the organisation said in a statement.
Celebrities have also come out and joined the calls for voters to stand up to the National Front.
French film director and actor Danny Boon, who is from the northern France region where Marine Le Pen achieved 40 percent of the vote, published a message on his Facebook page after Sunday's first round.
“I can not believe that my region, the one where I was born, where I grew up, where I learned everything that I love and that I value, whose tolerance, open-mindedness, sense of humor, generosity and humanity I have promoted in my films, could be led by a far-right party,” Boon said.