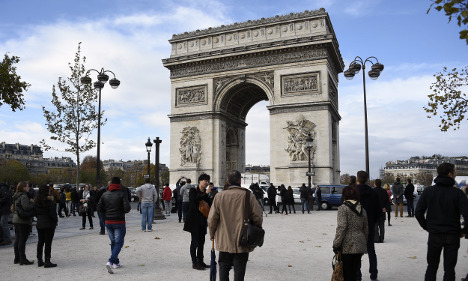 The Arc de Triomphe in Paris. Photo: AFP
The French-Dutch airline group said the attacks in which 130 people were killed “significantly impacted” November traffic to and from Paris.
Its planes had been carrying considerably more passengers to and from the City of Light before the attacks, compared with the same month in 2014, but then fell below last year's rate.
“The negative impact of the Paris attacks on total November revenues is estimated to be around €50 million ($54 million),” said Air France-KLM in its monthly traffic update.
“Current booking trends are in line with a progressive recovery including a very limited impact on volumes after the end of December 2015.
The €50 million was just 0.2 percent of last year's annual revenues, but was undoubtedly a much higher percentage of revenue earned through its key Paris hubs, although the airline doesn't break out the figures.
The airline's experience dovetails with that of Paris hotels and shops, which reported a sharp decline in business immediately after the attacks that has slowly begun to return to normal.
With tourism accounting for some seven percent of gross domestic product for France, which ranks as the top global tourist destination, there has been considerable angst the attacks could weaken the country's already anaemic growth.