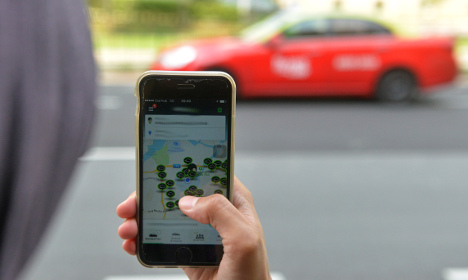 A Uber user books a ride. Photo: AFP
In January, France banned Uber's low-price UberPOP service, which allowed unlicenced drivers to become taxi drivers using their own cars.
Bans have also followed in Belgium, Germany and Holland, though the company's full-price service using professional drivers remains unaffected in France.
Uber continued to run the low-cost UberPOP service in France for several months after the ban, leading to a spate of violent protests by taxi unions in June that saw cars set alight and several Uber drivers and passengers attacked.
The San Francisco-based company finally shut down UberPOP in July after two of its French bosses were arrested and charged with “misleading commercial practices (and) complicity in the illegal exercise of the taxi profession”.
The appeals court on Monday increased the fine from ‎€100,000 that was originally handed down in October 2014.
It argued Uber misrepresented UberPOP by claiming it was a ride-sharing service rather than a normal taxi service.
France was the first country after the United States to have the UberPOP service when it was launched in February 2014.
The constitutional court upheld the ban in September.
Uber has become one of the world's most valuable startups, worth an estimated $50 billion, as it has expanded to more than 50 countries.