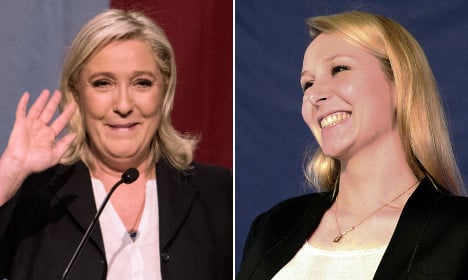 One is a pragmatist: a 47-year-old lawyer by training who has steered France's far-right National Front (FN) from pariah status to mainstream.

The other is an ideologue: her 25-year-old niece, a Roman Catholic traditionalist whose easy smile and blonde hair belie a stance on abortion, homosexuality and Islam that critics say is dangerous or sectarian.

The first round of regional elections placed the FN on track to break the grip of Socialists and conservatives, cementing the party's grassroots' rise across the country.

In the Nord-Pas-de-Calais, a rustbelt bastion of the Socialists who rule at national level, opinion-poll estimates gave Le Pen more than 40 percent of the first-round vote.

Victory in the second round on December 13 would give her a springboard for her bid to be president in 2017.

Marechal-Le Pen, meanwhile, also scored above 40 percent in the early estimates for the vast Provence-Alpes-Cote-d'Azur (PACA) region in the south, placing her on course for a landmark win next Sunday. Marine Le Pen was never supposed to inherit the party from father, who rocked the establishment by reaching the second round of the presidential election in 2002 at the expense of Socialist Lionel Jospin.

It was Marine's older sister, Marie-Caroline, who had been groomed to take over the helm.

But the FN's brutal internal politics and family splits saw Marine propelled into the limelight instead.

She took over the reins in 2011 and swiftly set about giving the FN “a different image to the stereotype” that opponents painted as visceral and xenophobic.

She sought to purge the worst of the anti-Semitic elements as well as the fundamentalist Catholics who for three decades had been one of the main strands of the party leadership.

Her makeover was hit by a very public rebellion within her own family.

Her father, now 87, was clearly unhappy with the direction in which she was taking the party and sought to undermine her with a string of anti-Semitic diatribes.

It led to Le Pen senior being thrown out of the party he founded in the middle of 2015. He and his daughter are said not to have spoken since.

But with the November 13 attacks in Paris, his daughter was able to turn attention away from the family soap opera and declare that the Western world had “no choice but to win the war” against the attackers from the Isis group.

“If we fail, Islamist totalitarianism will take power in our country,” she said. Many observers believe it is her photogenic niece Marion who is the real ideological heir of Jean-Marie Le Pen, and better placed at a time of crisis to woo electors worried about the nation's future.

She stood — unsuccessfully — for regional elections in 2010 and famously cracked when a reporter asked her to outline policy areas she wanted to address, unable to provide a single example.

But since becoming an MP, and a mother for the first time, Marion has gone through an astonishing transformation, building a growing following among young radicals and older party supporters disgruntled with her aunt's apparent moderation.

She had no qualms in standing up in the lower house, the National Assembly, and accusing a visibly furious Prime Minister Manuel Valls of “moronic contempt” towards the FN.

She also joined the ranks of anti-gay marriage protesters in 2013 when Marine decided to stay away.

Last month, she also demanded an end to state subsidies for family-planning associations, “which today are peddling abortion as something that's run-of-the-mill”.

And last week, she raised a storm when, in Toulon, a Mediterranean city with a large number of citizens of Arab descent, she said Muslims could only be French “if they follow customs and a lifestyle that has been shaped by Greek and Roman influence and 16 centuries of Christianity.”