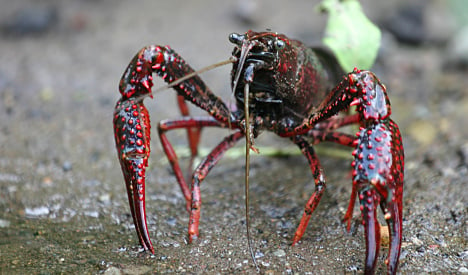 The Procambarus clarkii, above, is causing particular trouble in France. Photo: Mike Murphy/Wikicommons.
There are a total of 37 non-native invasive species in Europe that the European Commission has identified as being “of union concern”, a list that still needs to be adopted by the Commission in the coming days.
But the commission has vowed to limit these species' spread, by introducing a complete ban on importing, selling, growing and releasing the species, a plan that received approval on Friday.
For the banned species already in the EU, new measures will be implemented at the beginning of January to ensure they are kept under control.
Here are ten invasive species already in France.
The yellow-legged hornet, Vespa velutina
This hornet, introduced in 2005, has spread like wildfire across France, where it thrives as a predator of important pollinators like wasps and honeybees.
The European Commission pointed out that the huge size of its colonies have led to significant bee hive losses, resulting in losses of 14,000 honeybees per hive per month in France alone. Didier Descouens/WikiCommons
The North American red swamp crayfish, Procambarus clarkii
This “aggressive species” was intentionally introduced in France for aquaculture, and then escaped into freshwater streams.
It colonises territories and causes extinctions among rarer native crayfish, and carries a fungus-like organism which is wiping out entire populations of European crayfish, a disease that is estimated to have an economic cost of over €53 million per year. MikeMurphy/WikiCommons
American bullfrog, Lithobates catesbeianus
This frog, called the ouaouaron in French, is the largest north American frog. Ever since they escaped into the wild in Europe, they have preyed on everything from small birds to fish.
The commission notes that they are “a very serious threat” to indigenous species in Europe. Carl D. Howe/WikiCommons
Pallas's squirrel, Callosciurus erythraeus
Introduced to Cap d'Antibes (Alpes-Maritimes) in France back in 1974, this squirrel has become “a serious pest for agroforestry”, with a rapid population growth and without effective predators. Photo: alpsdake/WikiCommons
Raccoon, Procyon lotor
Introduced to France in 1966, the raccoon has since spread across Europe. It has few natural predators and can colonize a wide range of habitats and climates. The raccoon is a pest in agricultural systems and can carry parasites and diseases, such as rabies. Darkone/WikiCommons
Coypu, Myocastor coypus
Introduced in France way back in 1882, the coypu is still causing problems. The semi-aquatic rodent – originally from South America – escaped fur farms and started large feral populations across Europe. They damage river banks and irrigation facilities through their burrows, and destroy reed swamps through their feeding habits. Petar Milošević/WikiCommons
Ruddy Duck, Oxyura jamaicensis
This invasive species, introduced in France in 1974, is also on the European Commission's hit list. While there are already control programmes in place in France, the fight continues against the duck as it threatens to make the globally endangered white-headed duck extinct thanks to introgressive hybridisation and competition. Dick Daniels/WikiCommons
Siberian chipmunk, Eutamias sibiricus
After a population escaped from breeding farm in France, these pests have spread far and wide. While they do eat crops and can prey on low-nesting birds, the biggest threat these critters pose is as a carrier of Lyme disease, which can affect both humans and domestic animals. J. Patrick Fischer/WikiCommons
Chinese mitten crab, Eriocheir sinensis
These crabs can cause serious damages through their burrows, which erode dykes and stream banks. They affect commercial fishing by damaging nets and killing netted species, and disrupt aquatic food chains with their diet. Lycaon/WikiCommons
Pond slider, Trachemys scripta
These turtles are in competition with indigenous turtles, including some that are endangered. They are considered a potential vector of salmonella, which is dangerous to humans.