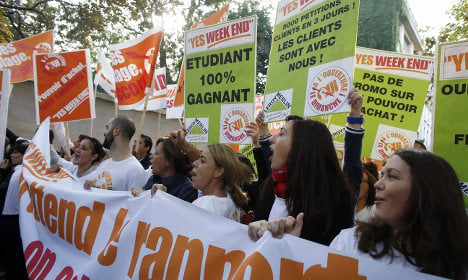 Sixty-eight percent of respondents to the Odoxa poll, appearing in Le Parisien newspaper on Sunday, said they were in favour of Sunday trading while 31 percent disapproved.

But when asked whether they would like to regularly work Sundays, 53 percent said no, with most saying they thought of the day as a time to spend with family.

In July the French parliament voted to adopt a package of economic reforms, easing the rules on Sunday working.

The legislative package provoked anger on the street, sparking the rare sight of white-collar workers such as notaries and pharmacists marching to demand the bill be shelved.

One of the key planks of the package allows shops in certain tourist zones — notably the Champs Elysees in Paris — to open every Sunday of the year.

The package is also viewed as crucial in Brussels, where the EU has urged France to reform in order to bring down its ballooning budget deficit, which is far above European limits.

In the opinion poll, 57 percent of respondents said that the new employment laws constituted social progress. However around three quarters of those questioned said the move “reinforces the consumer society” and makes Sunday less special.