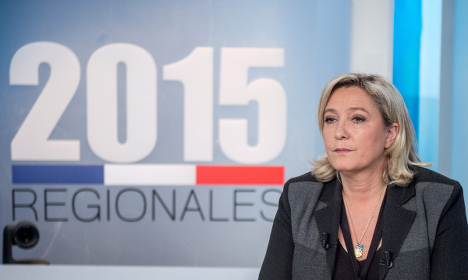 FN leader Marine Le Pen is on course to top the poll in the depressed Nord-Pas-de-Calais-Picardie region in the north. Photo: Philippe Huguen/AFP

Around 44 million people are eligible to vote, with France under tight security and in a state of emergency following the country's worst-ever terror attacks, which have thrust the FN's anti-immigration and often Islamophobic message to the fore.

First projections are expected at 1900 GMT with FN leader Marine Le Pen on course to top the poll in the economically-depressed Nord-Pas-de-Calais-Picardie region in the north, once a bastion of the left.

Her 25-year-old niece Marion Marechal-Le Pen seems to be heading for an equally strong score in the vast southeastern Provence-Alpes-Cote d'Azur region that includes beaches thronged by sun-seekers in the summer.

Opinion polls give the FN between 27% and 30% of the vote in the first round, a similar score to the centre-right Republicans led by former president Nicolas Sarkozy.

President Francois Hollande, who will cast his vote Sunday morning in Evry, to the south of Paris, has seen his personal ratings surge as a result of his hardline approach since the Paris attacks.

However his Socialist party has not enjoyed a similar boost, and is languishing at around 22% of the vote.

The FN is also expected to compete for power in the eastern Alsace-Champagne-Ardennes-Lorraine region that borders Belgium and Germany, according to polls by Ipsos and Odoxa.

Analysts predicted the FN could take all three regions in the second round on December 13 – if traditional parties refuse to join forces against them.

Victory would not only put the party at the head of a regional government for the first time, but would also give Marine Le Pen a springboard for her presidential bid in 2017.

She has made much in her campaign of the so-called Jungle migrant camp in Calais, where thousands of people have been camped for months trying to reach Britain and northern Europe.

With the FN also locked in a close race for Burgundy and Franche-Comte in the east, leading politicians on the left and right appealed to their supporters to go out and vote on Sunday to head off a historic FN win.

Prime Minister Manuel Valls urged activists at his only election rally on Thursday, December 3, to “appeal to patriotism” to ensure a massive turnout, with Marine Le Pen accusing him of waging “total war” against her.

But the Republicans' deputy leader Nathalie Kosciusko-Morizet claimed the election battle was far from over.

“Our duty is not to be paralysed by the polls and wait for the inevitable to happen, but to fight and fight till Sunday and prove the polls wrong,” she said.

The FN – whose leaders have repeatedly linked terrorism with immigration – has been climbing in the polls since the carnage in Paris on November 13.

When it emerged that at least two of the attackers had entered Europe posing as migrants, it allowed the FN to trumpet its message of “we told you so.”

But any election triumph will depend on whether the other parties are able to forge alliances against it.

Socialist leaders will begin talks after the first results come in on Sunday to decide if they will pull out of some second-round battles, with the Republicans meeting the following day to agree their strategy.

One Socialist expected to win is Defence Minister Jean-Yves Le Drian, a popular choice in the northwest Brittany region.