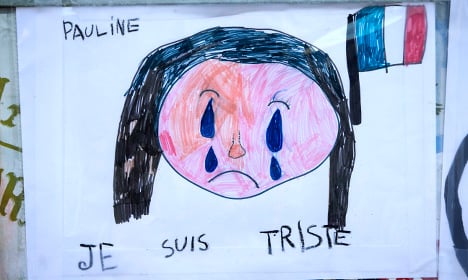 A child's drawing of a girl crying and a message which translates as, "I am sad" at a memorial to honour the Paris attack victims in front of the Bataclan venue in Paris. Photo: Joel Saget/AFP

Abaaoud, a Belgian of Moroccan descent, was killed in a police raid five days after the Paris attacks, along with a cousin and an unidentified third person, according to French authorities.

The WSJ also reported that “at least” one unnamed person connected to the series of attacks, which killed 130 people across the French capital, was thought to have travelled to Britain beforehand.

The newspaper said the man had managed to enter Britain and travel to London and Birmingham, before heading back to continental Europe undetected despite a “severe” threat alert.

“In both cities he met with people suspected of having the intention and capability of plotting or assisting terrorist activity against the UK,” The Guardian reported, describing him as an “ISIS (Islamic State) militant”.

The suspects visited are under investigation by Britain's domestic intelligence agency MI5 and police counter-terrorism officials, it added.

The British paper said that “months later” the same man was part of the Paris terror attacks.

The WSJ meanwhile reported that some of the Birmingham-based people were of Moroccan heritage, like Abaaoud.

Both the Home Office and the Metropolitan Police told AFP on Saturday that they could “neither confirm nor deny” the reports.

“Post the Paris attacks, the Met's Counter Terrorism Command have been working closely with colleagues in France,” a Met spokesman added.

“It would be inappropriate to comment on the French investigation.”

West Midlands Police said Saturday that it was aware of the speculation “regarding the Paris terror attackers and potential contact with people or places in Birmingham”.

West Midlands Police assistant chief constable Marcus Beale added: “The West Midlands counter-terrorism unit is working hand-in-hand with counter terrorism colleagues in London, the national CT network and security services to provide support to the French and Belgian investigations and of course to address any associated terrorism threat to the UK. “

Islamic extremists have surfaced before in Birmingham. Junaid Hussain, a high-ranking Islamic State group operative, was from there.

On Saturday, meanwhile, a 25-year-old man was due to be presented to an examining magistrate in Paris on suspicion of providing lodgings to two of the attackers, a legal source told AFP.

The man, identified only as Mohamed S., was in contact with two other people linked to Abaaoud.

The suspect knew Abaaoud's female cousin Hasna Aitboulahcen, and Jawad Bendaoud, who lent his apartment to the Belgian jihadist ahead of the attacks.

The prosecution will ask that Mohamed S. be detained and charged with criminal association in relation to a criminal terrorist plot, the source said.

Abaaoud, Aitboulahcen and an as-yet unidentified man were killed at the apartment in the northern Paris suburb of Saint-Denis when police stormed it.

For now, Bendaoud is the only person who has been charged in the Paris leg of the ongoing French-Belgian inquiry.

In Belgium, a total of eight people have been charged and locked up on suspicion of having helped the assailants who carried out the November 13 attacks which also wounded more than 350 people.

Seven of the gunmen and suicide bombers who carried out the attacks died on the night, although only four of them have been formally identified.

Three other people connected to the massacre were killed in the Saint-Denis raid.

A massive manhunt is under way for another suspected assailant, Salah Abdeslam.

Police are also seeking two other suspects who were with Abdeslam when he was stopped by police at the Hungary-Austria border on September 9. They carried false ID papers identifying them as Belgian nationals Soufiane Kayal and Samir Bouzid.