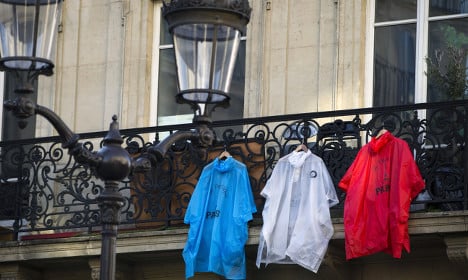 Three raincoats hanging in line from a window and bearing the French flag colours in Paris in tribute to victims of November 13 terror attacks in Paris. Photo: Joel Saget/AFP

If the families do not wish to hold a funeral, it is up to the local authorities in question to do so.

In any case, even “if there is no obligation to have an anonymous grave, that would be in everybody's interest,” he said.

Officials fear that such a grave could become a site of “pilgrimage” for other extremists.

Seven gunmen and suicide bombers were killed on November 13 but so far, only four of them have been formally identified.

Of the three who blew themselves up outside the Stade de France national stadium in Saint-Denis, one has been identified as French-born Bilal Hadfi, 20, who lived in Belgium. The other two remain unidentified, despite carrying Syrian passports registered as entering Greece in October in the names of Ahmad al-Mohammad and Mohammad al-Mahmod.

Another three were killed after attacking the Bataclan concert hall: two have been identified: Samy Amimour, 28, and Omar Ismail Mostefai, 29, both French nationals. The third attacker remains unidentified. And Brahim Abdeslam, 31, another French national living in Belgium, blew himself up outside a bar on Boulevard Voltaire.

Three other people were killed in a massive police assault on a flat in the northern Paris suburb of Saint-Denis. One was Belgian jihadist Abdelhamid Abaaoud, 28, the suspected ringleader of the attacks, while another was a French-born woman of Moroccan descent identified as his cousin, 26-year-old Hasna Aitboulahcen.

A third man who blew himself up during the raid has not yet been identified.

Questioned by AFP, the mayors of the Paris suburbs of Drancy, where Amimour lived, and Courcouronnes, where Mostefai was born, and Saint-Denis where three suicide bombers blew themselves up, said they had not been informed of any plans to bury them.

Alexandre Luc-Walton, lawyer for the Amimour family, said his clients “were waiting for news from the forensic institute. They still do not have permission to bury him.”

With the exception of Abaaoud, a Belgian national who was the suspected ringleader, and those who have not yet been identified, the attackers were all French nationals, although Brahim Abdeslam and Bilal Hadfi had been living in Belgium.

They could be buried in one of the Parisian cemeteries with a Muslim section, such as the one in the southern suburb of Thiais where Amedy Coulibaly, who attacked a Jewish supermarket in January, was buried.

But the cemetery said it had “not received any request to bury terrorists.”

Riva Kastoryano, author of the book “What to do with jihadists bodies?”, said that those behind earlier attacks “were buried in France, where they held citizenship, and where their parests lived.”

Where another country is involved, “everything depends on the relationship between the two states”, each of which accuses the other of “responsibility for the radicalisation”, says Kastoryano, who heads research at the French National Centre for Scientific Research (CNRS).

In the case of Mohammed Merah, who in 2012 shot dead three Jewish schoolchildren, a teacher and three soldiers, neither the city of Toulouse where he lived, nor Algeria where he came from wanted to take responsibility for the body.

“The mayor wanted to put off the burial but the very fact of leaving the body in the morgue gave it importance and meant people continued to talk about him,” recalls Abdallah Zekri, a senior figure with the Grand Mosque of Paris, who was asked by Merah's mother to organise his funeral.

“I wanted him to be buried quickly so everyone would stop talking about him.”

Fears that his grave would become a draw for other extremists have proved to be unfounded, he said.