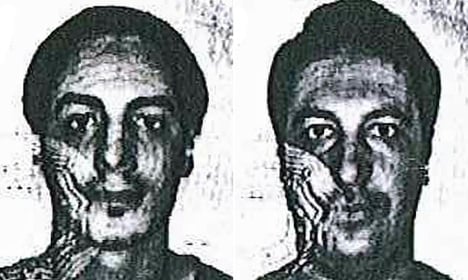 Handout images released by the Belgian police show two men being searched for as part of the investigation into the November 13 Paris attacks. Photo: Belgian police/AFP

The fake identity card of one of the suspects was also used to wire money from Brussels to Paris and the cousin of attacks ringleader Abdelhamid Abaaoud four days after the massacre in the French capital, the Belgian prosecutor's office said.

Both men are unidentified but carried the identities of Belgian nationals Soufiane Kayal and Samir Bouzid.

“The Federal Prosecutor's Office and the investigating judge wish to appeal to the public again to look out for two new suspects the investigators are actively searching for,” the prosecutors said in a statement.

According to the statement, Abdeslam was stopped by police at the Hungary-Austria border on September 9 accompanied by two men who carried false ID papers identifying themselves as Kayal and Bouzid.

The ID of Samar Bouzid was also used to rent a house in the town of Auvelias in southern Belgium that Belgian media reports say was used as a hideout to plan the Paris attacks.

Abaaoud and Aitboulahcen were both killed the next day in a police raid north of Paris, along with a still unidentified third person.

Belgian police issued the ID card photos of the two new suspects along with apparent security camera pictures of them at an unidentified location.

“These men are armed and dangerous. Anyone who sees those men, is asked not to undertake any initiative and to contact immediately the police,” it said in its wanted notice.

Last month Belgium issued an international arrest warrant for Mohamed Abrini, 30, who was filmed along with Salah Abdeslam at a petrol station in Ressons, France on the motorway to Paris, in a Renault Clio which was later used in the attacks.

Since Belgium opened its investigation last month it has charged eight people and been through a major terror alert that put Brussels on lockdown amid fears of a new Paris-style attack.

Two suspects were charged on Thursday in relation to the Paris attacks, including a Frenchman reportedly held at Brussels airport as he tried to board a flight to Morocco.

Among the others charged are Mohammed Amri and Hamza Attou who are suspected of having brought Salah Abdeslam back to Brussels.

Another of those charged, Ali Oulkadi, allegedly drove the key suspect around the Belgian capital while traces of blood and two handguns were found inside a vehicle of a fourth suspect, Lazez Abraimi.

Belgian media have identified the seventh suspect as Abdeilah Chouaa, whose link with the attacks remains unknown, and the eighth as Mohamed Bakkali, who is believed to be the owner of the home Auvelais that was raided.

Also on Friday, US media reported that several people suspected of having ties to ringleader Abaaoud were based in Britain.

At least one person connected to the attacks was thought to have traveled to Britain beforehand, the Journal reported.