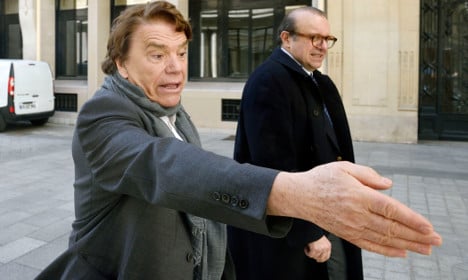 French tycoon Bernard Tapie, the former owner of sportswear giant Adidas, was ordered on Thursday to repay €404 million  ($437 million) he had been awarded in a long-running dispute with Credit Lyonnais bank.

The Paris appeals court said Tapie, who used to own Marseille football club, will also have to pay the legal costs and interest on the sum.

Tapie was awarded the money by an arbitration panel in 2008 after accusing Credit Lyonnais — which has since been privatised — of defrauding him by undervaluing Adidas when he sold the company in 1993.

But that ruling was clouded in scandal and haggled over for years in the courts before being overturned in February.

In a hearing in September, 72-year-old Tapie had demanded damages of between €516 million and €1.2 billion .

But the court of appeal ruled Thursday that the sale price of Adidas “corresponded to the actual value of (the company) when it was sold”.

The judges said Tapie's companies “were in possession of the same sources of information as the bank”, and were therefore in a position to make an informed judgement on the deal.

Tapie's lawyer Emmanuel Gaillard described the decision as “a pure and simple denial of justice”.

“We are therefore looking at every legal route open to us so that justice can finally prevail in this case,” he added.

The flamboyant Tapie — who has also dabbled in acting — bought Adidas in the early 1990s but decided to sell it to concentrate on his political career.

With Credit Lyonnais handling the deal, Adidas was re-sold in 1994 to businessman Robert Louis-Dreyfus for a substantially higher sum, and floated on the French stock exchange in 1995 — leading Tapie to claim that the bank had failed in its duty of care.

Tapie's repayment will go to the body charged with overseeing the former assets of Credit Lyonnais.