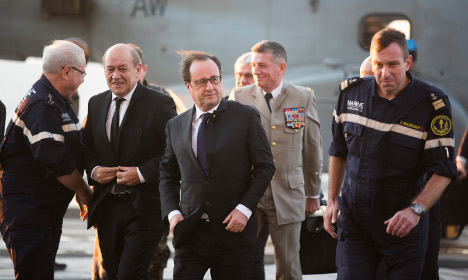 Photo: AFP
Hollande is expected to give a speech to the crew of the carrier which is off the coast of Syria, three weeks after he declared “war” on the jihadists after attacks on Paris in which 130 were killed.
Fighters taking off from the carrier have “tripled France's capacity to strike IS in Syria and Iraq”, a presidential source said.
Pilots have carried out 110 sorties from its deck since it arrived in the eastern Mediterranean on November 23. The visit, the first time that a French head of state has visited an aircraft carrier on operations, comes as Hollande tries to step up international military action against the group.
The Charles de Gaulle — which carries a crew of around 2,000 — sailed from its base in Toulon in the south of France five days after the attacks on Paris.
The Socialist president has seen a surge in his popularity ratings since he declared “war” on IS after gunmen and suicide bombers attacked the French capital on November 13.