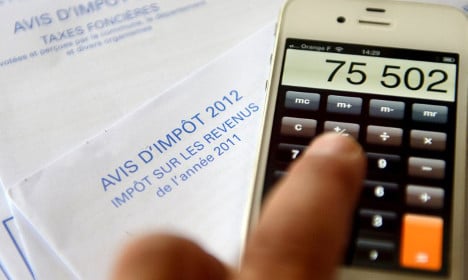 France’s tax revenues rose once again in 2014, meaning the French face the second highest tax burden in the world.

The word tax has of course long been synonymous with France and confirmation of why became clear in the latest OECD study on countries' tax revenues.

The study, which looks at the tax burden of the each of the developed countries in the OECD, showed that France’s tax receipts had risen once again in 2014 by 0.2 percent.

Tax revenues in France now stand at 45.2 percent of the country’s GDP.

However that wasn’t enough to put France top of the table.

The title for the OECD country with highest tax burden in the world goes to Denmark, where tax revenues are worth 50.9 percent of GDP.

The average for the OECD countries is 34.4 percent.

While Germany has a lower tax burden than France, it earns more through income tax and levies on consumption. However the French tax man pulls in more than his German counterpart through taxes on companies and welfare charges.

The study shows that after dips in tax revenues between 2007 and 2009 caused by the financial crisis, the percentage of tax burden has risen again to its highest level since 1965.

France's high tax rates have often been blamed for why so many French seek to head abroad.

A recent study from Les Echos newspaper revealed that in 2013 the number of French tax payers earning over €100,000 a year leaving for abroad rose by 40 percent, with 3,744 individuals heading for the departure gates.
That compares to 2,674 in 2012, the year President François Hollande was elected, and 1,330 in 2010.
And for the very, very rich who earn over €300,000 each year, the number of nationals quitting France rose by 46 percent from 451 in 2012 to 659 in 2013
Les Echos notes that while the exodus of high earners rose by 40 and 46 percent, the increase in the overall number of French going abroad rose by six percent.
Another recent study on the migration flows of the world's richest people by New World Health also spelled bad news for France. Over the period of 2000 to 2014 France was ranked third in the world for the number of millionaires (42,000) who left the country.
But most studies suggest the French are simply heading abroad for professional rather than tax reasons and that goes for the country's most wealthy too.
Speaking to The Local previously, Fabienne Petit director of international activities at French firm Humanis, which works with French expatriates in the area of health cover and insurance, explained it was a myth about wealthy French fleeing the tax man.
“It’s a real cliché to say that all French people are going abroad for only fiscal reasons. In fact only 17 percent of people leave for financial reasons, so we need to put an end to this myth,” he said.