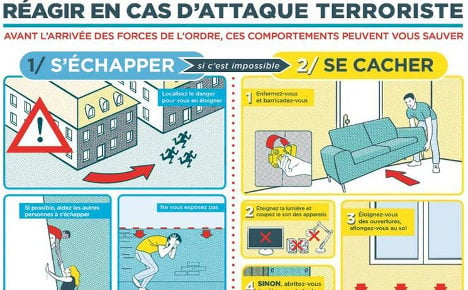 Posters are to be placed at key locations throughout France advising the public what to do in the case of a terrorist attack, like the one seen in Paris on November 13th.

The posters were distributed to government ministries on Friday and will eventually be placed in town halls, local authority buildings, big shops, stadiums and museums.

The posters are inspired by the style used for the cards used on airplanes to advise passengers what to do in the case of an emergency.

They will be shard around on social media and video will follow shortly.

The advice is split into three parts: Escape, hide, call for help

In the case of those who get a chance to run and escape the type of attack seen at the Bataclan music theatre, authorities say people should try if possible to help others escape.

But people are told not to expose themselves to danger but alert others in the vicinity and urge them to stay away. If escaping is impossible, the public are advised to hide and if possible barricade themselves in a closed area as many did at the venues targeted on November 13th. Once someone is in a safe place they are advised to call emergency numbers 517 or 112 to alert the police about their whereabouts and what is happening.

Once the forces of order are at the site of the attack, the public are advised not to run towards them or make any sudden movements in case they are mistaken for terrorists.

When they see the police raid team they should walk with their hands in the air, palms open. Apart from the three-stage guide the public are also advised to make themselves aware of where the emergency exits are when entering a venue.

They are also told not disseminate unverified information on social networks.

“We need to continue to live with a threat that will last a while, so we need to develop a culture of potentially life-saving gestures and solidarity,” a source at the prime minister’s office told Le Figaro newspaper.

“The goal is extremely simple: to promote the most effective acts to protect lives before the forces of order arrive,” the source said.

Similar posters were placed at London underground stations in November 2014, but many criticised the move for creating more panic than reassurance.