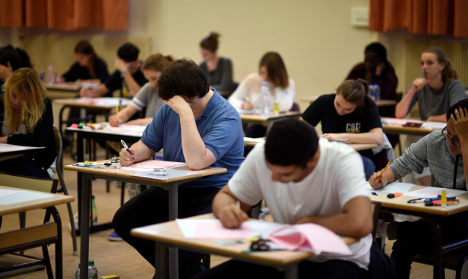 Photo: AFP
The figures were revealed by the 20 Minutes newspaper on Thursday, and confirmed soon after by the Ministry of Education.
The paper noted that the number may seem alarming, it's only a very small percentage of the total 5.5 million students at French high schools.
Students who are leaning towards radicalization have been caught out through social media monitoring and comments they have made in the classroom.
Another large factor has been thanks to the vigilance of teachers who are on alert ever since the the January Charlie Hebdo attacks, after which the government provided information to help prevent radicalization among students.
A ministry spokesperson said that teachers have been urged to keep an eye out for several factors that may suggest a student is becoming radicalized.
These include changes in dressing habits, behaviour towards women, “systematic protests” towards subjects like history and life sciences, as well as any hint of a sudden interest in religion.
It marked part of a larger government push in the hope of dissuading young French nationals from heading to the Middle East to fight with Islamic jihadists, which included shock videos suggesting they would “find hell on earth and die alone, far from home”.
Another government campaign, released in October, saw a group of French parents speaking out about their suffering and constant anguish after their sons and daughters left home to fight jihad after converting to Islam.
France remains under a national state of emergency after terrorists killed 130 people in Paris last month.

See one of the videos from the government's October campaign, below. Read more about it here.