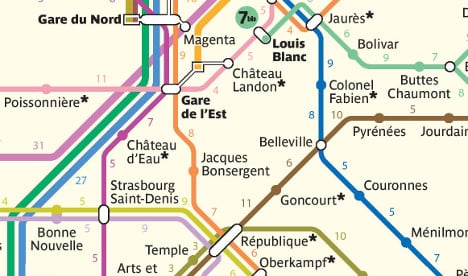 Photo: Guillaume Martinetti
Good news for tourists – a new map has been released showing exactly how much walking time is between each station on the Metro map.
The map's creator, transport planner Guillaume Martinetti, told The Local that the official map is far from geometrically perfect, and that the distances shown between stations can be deceiving.
“I'd noticed that it was sometimes quicker to walk than to take the Metro for just one of two stops,” he said. “So I decided to modify the map.”
The benefits of his new map are numerable, he said, including potentially alleviating the pressures of rush hour if people realize that they could walk just as quickly.
“And what's more – walking is good for your health!” he added.
No doubt with the added kicker that the COP21 climate summit is in full swing in Paris, Martinetti's map has proved a hit on the internet, being viewed 60,000 times on Twitter and prompting interviews for media across the country.

He said that he used information from Paris transport chiefs RATP together with the Google Maps walking predictor function to make the map, a high definition version of which can be seen here, all based on the assumption that the walker is moving at a pace of 4.5km/hr.

He found that some stations are just three minutes' walk from each other – such as République to Temple, and even Temple to Arts et Métiers.

For the moment, the map remains unofficial – but that doesn't mean it can't potentially save you a few euros.

The map follows hot on the footsteps of a similar map of the London underground, which was rolled out by London transport authorities last month.

If you find yourself with some extra time thanks to walking around Paris rather than being stuck on the Metro, why not try your hand at these (increasingly difficult) Metro station word puzzles created by The Local. Good luck!