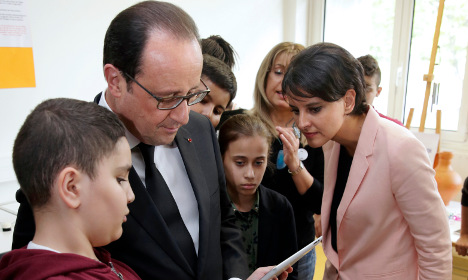 The latest hate-filled Isis propaganda tool, which is aimed at recruiting French jihadists was titled “France on its knees” and delighted in the recent terrorist attacks in Paris.

Dar al Islam turned its sights on France's public schools and specifically the teaching of secularism.

“France has charged its schools with teaching Republican values,” the magazine says, “but these values are nothing but a web of lies and blasphemy.”

The article about French schools is particularly concerned with laïcité, the French value of strict secularism in public spaces, which they say is “unable to coexist with Islam as the one true religion”.

Dar al Islam says that the solution for French parents is to emigrate to the “Caliphate, where they can enroll their children in “truly Islamic schools, purified of blasphemy and sin.”

The magazine also claimed that parents should “fight and to kill ” the teachers of laïcité.

Charts explaining laïcité to schoolchildren have been posted in French schools since 2014.

Teaching secular values was further emphasized in schools after the attacks on Charlie Hebdo and Hyper Cacher supermarket as a strategy to better promote tolerance and respect for freedom of speech.

The propaganda magazine also pointed out various other “sins” in French schools, notably the fact that boys and girls go to the same schools.

“That's an open door to fornication” reads the magazine.