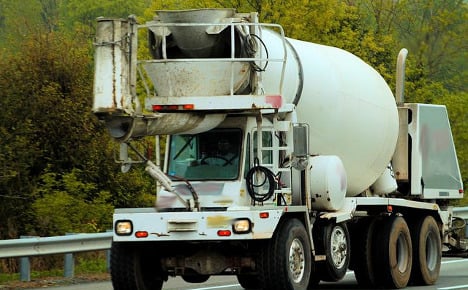 Nineteen refugees were found inside the truck. File photo: rclarkeimages/Flickr
The discovery was made near Ghyvelde in the far north of France on Thursday morning.
“The migrants were in the back of the truck and thought they were heading to the UK, but they were actually on the way to Belgium,” local police told France TV Info.
“The driver had heard a noise and at the border check he asked police to investigate.”
Police found a total of 19 people inside, who were promptly told to leave the truck and then “set free”, the police said. Two of the migrants were taken to hospital showing signs of intoxication, presumably from the dry cement powder in the truck.
The migrants are understood to have climbed into the truck at nearby Calais, a major transit city for truck drivers heading to the UK.
Refugees are becoming increasingly desperate to cross the Channel to get to the UK, and every night hundreds risk their lives in trying. Authorities claim only a tiny number now succeed.
Some attempt to scale the triple line of fences around the heavily-guarded Channel Tunnel entrance or smuggle themselves on to lorries near the Calais ferry terminal.
Seventeen have died trying to reach the UK from the camp since June, according to an AFP count.
An estimated 4,500 refugees live at the Calais camp, called The New Jungle, in conditions described on Wednesday as a “serious breach of human rights” by France's prison watchdog.