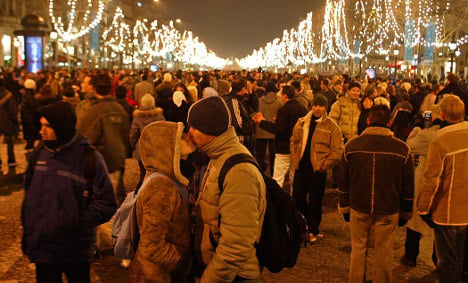 Revellers kiss at a past New Year's Eve on the Champs-Elysees. Photo: AFP

Under the state of emergency imposed on France after the November 13th terror attacks, all large gatherings have been banned due to security fears.

Parisians, for example, weren't allowed to have a solidarity march like they did after the January attacks on Charlie Hebdo.

Now, authorities have to decide whether to cancel one of the city's biggest gatherings of them all – the New Years Eve Party on the Champs-Elysées avenue, an event which drew in 600,000 people last year.
“From a symbolic point of view, it would leave us with heavy hearts if we had to cancel it,” Bruno Julliard, deputy mayor of Paris, told Le Parisien.
“But if the prefecture of police asks us to cancel it, then we will,” he said, adding that meetings were ongoing.
The president of the Champs-Elysées committee, Jean-Noël Reinhardt, said it would “obviously be sad” if the event was canned.
“But we understand that when it comes to a gathering of this size during times like these, police are bound to favour security,” he told the paper.
With potentially over half a million people gathered, it's not hard to see why the event would be a major headache for police officers. On the Champs-Elysées alone, 1,700 police officers were dispatched at last year's celebrations, with 9,000 in total on the streets around the capital.
Furthermore, Parisians themselves remain tetchy in the wake of the November 13th attacks which saw 130 killed – many of whom were out and about enjoying an evening in Paris.
Even the sound of small explosives two nights after the attack was enough to cause mass panic, as was demonstrated when a suspected firecracker was let off in a central square.
And if the blind panic among hundreds of Parisians was enough to scare some witnesses to death, it's worrying to think how the situation would play out if the crowds were multiplied by thousands.