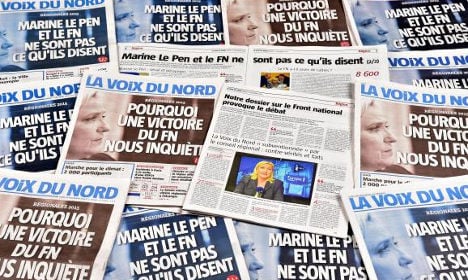 French regional newspapers, which outsell their national counterparts, rarely take a strong editorial line in the run-up to elections.

But that was until La Voix du Nord, which serves the Nord-Pas-de-Calais-Picardie region in the far north of France made its stance clear this week in the run up to next Sunday's first round of voting in the regional elections.

Articles headlined “Marine Le Pen and the Front are not who they say they are” and “Who are the members of the National Front really?” cast doubt on the party's ability to govern the depressed region, once a Socialist stronghold.
Le Pen, who looks set to win the region — France's second biggest — in the two-round vote which ends on December 13, reacted with fury to the “scandalous” attacks claiming they were little more than “tracts” in support of the ruling Socialist party. The region is threatened

“This is an unprecedented situation we are facing.

“We are used to the National Front doing well in elections. They won around ten towns in last year's local elections but they have never won a region as important as ours.

“They could win control of Nord-Pas-de-Calais-Picardie, a region of six million people. We felt we needed to explain to our readers the significance of that.

“This is a region at the heart of North West Europe, just across the English Channel from the UK and on the border with Belgium. We are half an hour from Brussels and Paris and not far from Amsterdam. Many foreigners work here.

“The Nord-Pas-de-Calais-Picardie region is the second in the country after Ile-de-France in the terms the amount of foreign investment it attracts.

“But the National Front’s policies are anti-Europe and anti-immigration. Marine Le Pen is against free trade and any kind of globalisation. She wants to close the borders. All these policies would break the commercial and economic activity of the region.

“To put it simply if Marine Le Pen’s party wins, it will be bad for the region.

“If that happened it would not only be significant for this region but it would have a huge impact on the 2017 presidential elections, which are a little over a year away.

“Winning the region would give Marine Le Pen far greater credibility and a much stronger platform to campaign for the presidential election. It would have huge knock-on effect. Why we had to act

“We are a newspaper of information, not one of opinion. We examine the left and right and we don’t support any political party.

“But we do have convictions and certain values which have been in place since our creation during the French Resistance. We are attached to the values of the Republic, to liberty and to pluralism.

“Our values are just not compatible with the ideology of the National Front and their constant distortions, exaggerations and obsessions.

“We haven't told readers who to vote for but tried to explain exactly who the National Front are. We are reminding them of the difference in values and at the same time doing our work as journalists to inform our readers of the programme of the National Front, as we do for all parties.

“It is our job to go beyond the appearances. The National Front play a game of duplicity and ambiguity, trying to show the voters that the party has been de-demonised, but behind that visage they are still radical.

“In their programme we found a phrase that mentioned the need “to wipe out bacterial immigration”. The party has since claimed it was an error, but it was there.

“They say they are not like other parties, who are “all rubbish”. They claim that they have all the virtue and the moral high ground and anyone who is against them has none.

“It’s dangerous and we as a newspaper have tried to show the reality. That is our job as journalists even if it really doesn’t please the National Front.

“We have complicated relations with all political parties but the National Front really don’t accept criticism from others and they aggressively reject people who disagree with them. It quickly descends into intimidation.

“In the run up to the elections we saw that the National Front support was rising. We didn’t have a referendum in the newsroom about coming out against the party, but most journalists were saying “we have to do something”. The shareholders and the board agreed.

“We have had a huge reaction from readers. In my 35-years at this paper I have not seen anything like it. We have had some very hostile comments, some saying we shouldn’t take a position and others saying “bravo, now we can have a much needed debate”.

“We will have to wait and see if there’s any impact on the elections, but what is important for us is that people can finally openly talk about this issue.”