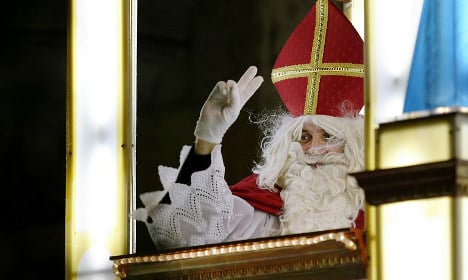 Why not take in Saint Nicholas weekend in Nancy? Photo: AFP

Although most cities have their own Christmas market, it’s worth making the trip to Strasbourg in eastern France for a spectacularly festive experience. With a claim to the title of the oldest Christmas market in Europe, it keeps tradition strong with a range of events on offer, including music, craft workshops and activities for children alongside the usual stalls and food. The markets are open daily between 11am to 8pm.

The Transmusicales festival is now in its 30th year, and has a reputation for discovering future chart-toppers. Portishead, Nirvana, Kate Nash and the Ting Tings all played here before they found fame, so you have a good chance of finding your new favourite artist here.

Parents searching for a magical Christmas experience for the family need look no further than this show at the stables of the Chateau de Chantilly, just north of Paris. This year, classic fairytale Beauty and the Beast will be transformed into a visually stunning performance incorporating live horses and acrobatics.


One of the Chantilly horses taking part in a show last year. Photo: AFP

Wine lovers rejoice, here's an event dedicated only to the finest wines – each variety on display at the fair has been through a rigorous judging process before it makes its way into your glass. There are several different events ranging from talks to masterclasses – and of course, tastings – in the Carrousel de Louvre shopping centre.

Although security measures mean the planned firework displays and closing parade have been cancelled, authorities in eastern France's Nancy have increased the number of other events on offer at this traditional celebration. Over 330 artists, groups, and bands will perform in 80 shows in honour of Saint Nicholas.


A man dressed as Saint Nicholas waves from a window at a previous festival. Photo: AFP

This is the twentieth annual show from the city’s antique dealers, and it takes place in the impressive surroundings of the Saint-Anne Church in Montpellier, southern France. Thirty collectors will display their artefacts, including artworks, jewellery, furniture, books, textiles, and there are sure to be a few curiosities on show.

This version of Tchaïkovsky's ballet is performed by the renowned Russian National Opera in Nice, southern France. It promises to recreate the world of childhood with its dreamlike combination of dance and orchestral accompaniment.

After moving to Montpellier last year, the third annual gathering of France's handball elite is being held in Bercy, Paris. French handball players, nominated by their teammates to represent their country, will face foreign teams in what is sure to be a nail-biting championship game. German artist Anselm Kiefer will be celebrated in an exhibition devoted to his 40-year career, spanning the mediums of painting, culture and installations. Born in the spring of 1945, Kiefer engaged particularly with German history and myths, examining his country's past and incorporating mixed materials including metal, ash, straw and clay into his work. Kiefer with one of his works, Essence. Photo: AFP

The humble chestnut is the centre of attention in Bocagnano's yearly fair – a tradition dating back to 1982. In addition to the nuts, over 150 farmers gather to sell their produce, including cheeses, oils, pastries and wine, and there are also musical performances and celebrations of Corsican culture such as literature and woodwork. A photo from a previous chestnut fair in Bocagnano. Photo: AFP