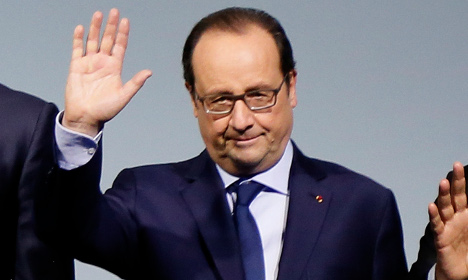 French President Francois Hollande's ratings zoomed up to 50 percent, the best since 2012, following his hardline response against jihadists after the Paris attacks, a poll showed Tuesday.

It was the best score for Hollande since July 2012, according to a poll by Ifop/Fiducial for Paris Match and Sud Radio. The French leader's popularity had reached extremely low levels in the past three years.

Hollande's approval ratings, which have been hit by his failure to stop unemployment, had earlier shot up by 21 points in the aftermath of the January attacks on the Charlie Hebdo satirical magazine and a Jewish supermarket in Paris.

“For the second time this year, we have witnessed a tremendous surge in the president's popularity,” Ifop's deputy director Frederic Dabi said.

Hollande's ratings improved in the days and weeks after the January terror attacks, but it did not take long before they started to dip again as unemployment continued to rise and the economy floundered.

The president is unlikely to read too much into the latest poll with around 18 months to go until the next presidential election, which most experts believe he has little chance of winning.

The latest poll results were published just five days before the first round in a regional vote that is widely seen as a litmus test of the 2017 general election.

For the first time, the far-right National Front appears set to win at least two regions.

Another 38 percent feel the president “is close to the concerns of the French”, while only 28 percent want him to be re-elected in 2017.

The results of the poll were based on telephone surveys conducted with 983 adult respondents on November 27 and 28.