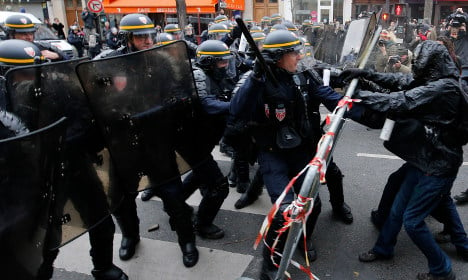 Rights groups, trade unions and politicians are voicing growing opposition in France to the ongoing state of emergency declared after the Paris terror attacks and are calling for an end to the ban on demonstrations.

This week a Frenchwoman was fined €1,000 for refusing to allow her fingerprints to be taken by police after she was arrested for taking part in a banned demonstration in central Paris on Sunday, during which there were ugly clashes with police.

The 25-year-old’s lawyer said legal proceedings against her “verged on the ridiculous”, adding that out of the hundreds arrested over the demonstration only two people had appeared before the court.

The case is just the latest ammunition for a growing movement calling on the French government to end the state of emergency and – in particular – to allow the French public to carry out their sacred right to demonstrate.

Public marches and protests were banned as part of the measures included in the state of emergency and in part to prevent large scale demos during the COP21 climate summit in Paris, with authorities saying such protests would have over-stretched police resources.

On Tuesday the police imposed new bans on Paris’s prestigious Champs Élysées and near the venue for the climate conference at Le Bourget, north of the capital.

The following day 58 politicians, charity heads and writers signed a letter demanding the right to demonstrate be returned immediately.

“Our best weapon against terrorists and disorder in the world is to get together, talk and express our opinions. That's what Daesh and others want to ban. This is what we stand for,” said the text.

French MPs voted recently to extend the state of emergency to February, but with the PM Manuel Valls already talking of a further prolongation, rights groups are increasingly concerned.

“There is no justification for the state of emergency to last so long,” lawyer Patrick Baudouin, Honorary President of the International Federation for Human Rights (FIDH) told The Local.

“We had the horrendous terrorist attacks in Paris and we needed to react to ensure the security of the French people, and the state of emergency was imposed for 12 days.

“There was an immediate vote for it to be extended for three months but the threat of terrorism will not be dealt with in three months. The time limit is totally arbitrary,” Baudouin warned.

Since the state of emergency has been implemented, the French government has been eager to release statistics on the number of arrests and arms seized in raids in order to justify the extreme measure and reassure the public.

The latest such count showed 2,000 raids have taken place with 210 suspects taken in for questioning on various offences and 250 legal cases launched as a result of this action.

As well as the ban on Sunday’s climate change protests, it has emerged that numerous ecologists were placed under house arrest in France over the weekend.

“This state of emergency grants the forces of order like the police and the army exceptional powers that puts people’s liberties at risks – whether it’s night time raids on their homes, house arrests, or the ban on demonstrations,” Baudouin says.

Critics say the ban on demonstrations restricts social movements and a vital element of the democratic process.

“The ban on demos goes beyond the need to avert the risk of any terrorist attack. It has been implemented to avoid any trouble rather than an attack,” Baudouin argues.

Both the French President and his PM Manuel Valls have frequently talked of France being “at war” to justify the exceptional state of emergency.

But the rights lawyer says the language repeatedly used by President François Hollande is unhelpful and misleading in a country clearly on edge. It is only playing into the hands of the terrorists, he says.

“We are not at war, we are not in a state of war. It’s a very worrying situation for the security of the French people, but the terrorist threat exists in many countries, and they are not all at war.

“We are in a fight against terrorism that is perfectly legitimate, but we cannot confuse that with war.

“To talk of war is totally counterproductive because that’s exactly what Isis wants. George Bush used the term “war” after September 11th and we saw the dangerous effects.

“We had wars in Afghanistan and Iraq. We had Guantanamo and Abu Graib. War allows Isis to demonize the west and give it legitimacy to attack it.”