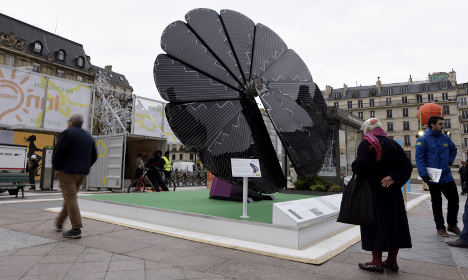 With diplomatic motorcades periodically interrupting traffic, and pop-up installations springing up throughout the city, the COP21 summit has quickly made its presence felt among residents.

In the aftermath of the November 13th terror attacks, however, many have wondered if climate change was still a priority for the summit’s French hosts. Even President Hollande’s special envoy on climate, Nicolas Hulot, said he was worried the attacks would put climate change on the “back-burner”.

But this isn't a view shared by the Parisians, with many telling The Local they were thinking about environmental issues more than ever as a result of the summit.  While the COP21 negotiators try to broker a global deal to limit carbon emissions, Parisians are looking at what they can do to tackle climate change at the local level.

Françoise, a retired social worker living in the 19th arrondissement, said she was trying to reduce her own contribution to climate change by reducing waste.

“Having the COP21 in town makes you pay more attention. You realize there are some very simple changes you can make that have an immediate impact,” she says. Francoise, left, and her friend Francesca, right. Photo: The Local

“It’s everywhere on social media,” says Francesca, a 43-year-old caregiver. “People are sharing links about climate change and the environment every day.”

These two aren’t the only Parisians reconsidering wasteful practices. French organic food chain Biocoop opened Paris’s first supermarket with no packaging at the beginning of November.

The pop-up store has been a hit with consumers for selling products only in bulk and with no disposable packaging other than recycled paper bags. The store was only planned to open until the end of December, but managers have decided extend opening hours until the end of February.

Many Parisians say they care about tackling emissions, but are less motivated by global warming than by the desire for cleaner air in their own city. Climate pop-ups can be found across the city. Photo: The Local

“I mostly bike to get around,” says Armand, a 26-year-old lighting designer. “Some days it’s hard for me to breathe when I’m out in the street. It stinks!”

Paris is choked by air pollution – the local public health agency ORS estimates that nearly a third of new cases of asthma and allergies in the French capital can be attributed to the problem. COP21 has made people think about how reducing the city’s reliance on cars and trucks could sold the city’s air pollution crisis in addition to lowering the city’s contribution to global warming.

Others say they’ve begun to think about how global warming could start having more tangible effects on France.

“People weren’t as concerned about climate change until they started hearing about how it might affect French products, especially wine” says Eloise (pictured below), a 25-year-old from Bordeaux.

“Now people are talking about how if global warming goes past 2C, the climate would be more like Spain. We would have to start watering the vines, which is currently forbidden.” Eloise, from Bordeaux, outside the Hotel de Ville. Photo: The Local

Along the Bassin de la Villette in the 19th arrondissement, innovations that could potentially be implemented as part of Paris’s green transition are being displayed at an outdoor exhibition. As they walk along the canal, residents can stop to plug in their phones at solar charging stations or check out prototypes for inventions like the “green urinal” that could turn Paris’s public urination problem into a source of compost.

Kévin Janin, an urban transit researcher, was there to tell visitors about a plan for integrating freight cars in the Paris Metro. He says that while the terror attacks took over Parisians’ attention during the lead-up to COP21, people still want to engage with the summit now that it’s here.

“The COP21 is making Parisians think,” he tells The Local.

“People won’t change their habits all at once, but they are starting to take steps in the right direction.”