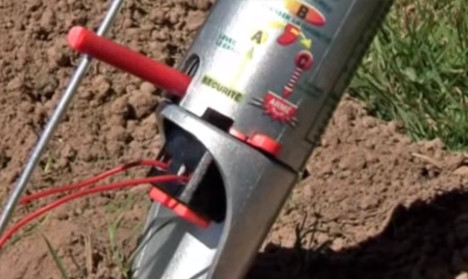 A closer look at an anti-mole explosive. Photo: Le Detaupeur/YouTube (Screenshot)
The thefts were carried out across three different départements in central France, with the thieves targeting gardening stores and large gardens in Rhône, the Loire, and Saône-et-Loire, a source close to the investigation told Le Parisien newspaper.
The devices that were stolen – called a détaupeur in French – is a small cracker-like explosive that is inserted into the a mole burrow.
When a mole tries to push soil up to patch the hole, it sets off the detonator, killing it instantly. (See the demonstration video below.)
The company that makes the anti-mole explosives claims that the product is used by 500,000 customers across the country.
This weekend's theft begs the question – why would anyone want to steal so many explosives?
The police source told Le Parisien that it hadn't been ruled out that the parts were ordered from the “people of the east”.
“They've ordered razor blades and catalytic converters before, why not anti-mole detonators?” the source said.
The anti-mole devices contain potassium perchlorate, which can be used as a rocket propellant. The AFP noted that the amount of explosives stolen – 800 grammes – would be enough to construct a small bomb.
It's perhaps no surprise that the unusual story has made headlines in newspapers across France, with people still very much on edge after terrorists killed 130 people in a series of coordinated attacks last month.
Even the sound of small explosives in Paris has been enough to cause mass panic, as was demonstrated two nights after the attack when a suspected firecracker was let off in a central square.