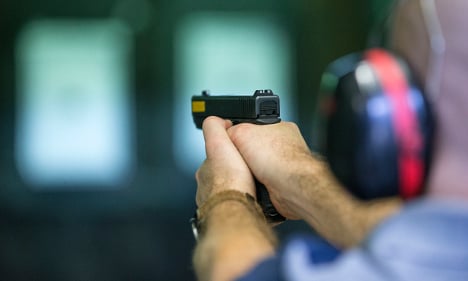 The terrorist took an training course in firearms in 2012. Photo: AFP
Samy Amimour, who blew himself up at the Bataclan concert hall during the November 13 Paris attacks along with two other gunmen, was no stranger to firearms, according to France's iTele TV channel.
The 28-year-old had a federal licence for 2011/2012, as well as a membership at the national police shooting club in Paris (Association nationale de tir de la police – ANTP), I-Tele said.
In April 2012, he reportedly took an initiation course at the club, which is one of the most popular in Paris and boasts 2,350 members, according to its official website.
At the time, the former bus driver was able to sign up to the course as he had a clean criminal record. He even shaved off his beard so as not to arouse suspicion, reported iTele.

The introductory course, which runs for two hours, sees participants trained in handling a semi automatic handgun, together with .38 Special and .22 Long Rifle ammunition. Pictures of the building's interior are included above.
Amimour, who was from the northeastern Paris suburb of Drancy, was known to anti-terror investigators after being charged on October 19th, 2012 with “conspiracy to commit terrorism” over an attempt to travel to Yemen but was released on bail.
He left for Syria on September 11, 2013, violating the terms of his bail, and prompting judges to issue an international warrant for his arrest.
His father travelled to Syria in 2013, on a failed mission to try convince his son to return to France.
The man told Le Monde in 2014 that his son had been injured and was on crutches during the brief reunion.
“Samy was with another guy who never left us alone. It was an extremely cold reunion and he did not take me to his house, did not tell me how he’s been injured [or] if he had fought,” the father, Mohamed, said.
In summer 2014 he was still in Syria and his family told AFP their hopes of seeing him again faded because he had married there.