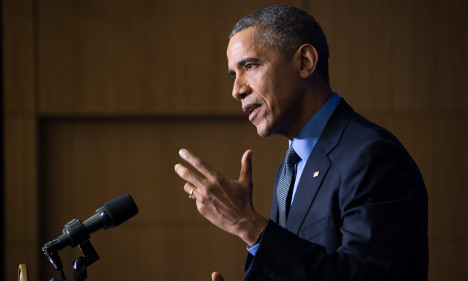 Speaking at the OECD in Paris on Tuesday, US president Barack Obama paid tribute to France for hosting the COP21 climate summit just two weeks after the devastating attacks in Paris that left 130 dead.

Obama, who dined with French President François Hollande on Monday night, declared that a few individuals could not wreck Paris.

“Sometimes after something like Paris, it's normal for people to despair,” the president said.

But “the demented actions of a handful of individuals can't tear down Paris,” he declared. “The life, the people, the diversity, the joy will win every time.

“Our solidarity will win out. Vive la France.”

Obama had arrived in Paris in the early hours of Monday morning to join around 150 other world leaders at the COP21 UN climate summit at Le Bourget, to the north of Paris.

His first act after touching down was to visit the Bataclan venue where 90 people were massacred by three gunmen, who then blew themselves up.

Obama said the visit to the site of the slaughter was “a powerful reminder of the human toll of these attacks”.

“Our hearts go out to the victims' families.”

Obama says visit to Bataclan was reminder of the awful human toll of the terrorist attacks in Paris pic.twitter.com/otUAMHGB0n

He also paid tribute to the resolve of the French people and the “extraordinary hospitality” he had experienced just two weeks after the attacks.

“Here in Paris we see the resilience of the values we share: liberté, égalité and fraternité.

“Visits to Paris always feel too short, you always want to stay longer,” the US president said.

France and the US have joined forces to carry out bombing raids on Isis in both Syria and Iraq, and both countries hope the British and the Russians will focus more attention on tackling the “terrorist group”.

But he warned that Isis would continue to be a threat for some time and the organization needed to be “choked off” financially and prevented from being able to recruit more foreign fighters.

And for that, he believes Russia must get fully on board.

“Russia will recognize the threat that Isis will pose to their people,” Obama said. “They need to align themselves with the people fighting Isis.”

On the issue of climate change, Obama was equally positive of “winning” the battle, but admits the question would be how long it will take – and how much damage will have already been done by that point.

“I actually think we are going to solve this thing.”