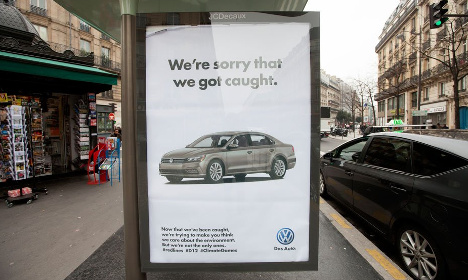 One of the advertisements targeting Volkswagen. Photo: Brandalism/Twitter
Authorities may have banned protest marches during the COP21 climate summit, but that hasn't stopped campaigners from finding other ways to express their discontent. Artists and activists have joined together to slam the 'hypocrisy' of companies and heads of state involved in COP21, using guerilla advertising.
The 12-day summit, which officially began on Monday, aims to reach a globally binding accord to limit warming to 2C above pre-Industrial revolution levels.
But a series of over 600 artworks, displayed on billboards and bus stops across Paris, points out that the corporate sponsors are not so climate-friendly themselves, and accuses politicians including President Francois Hollande and UK Prime Minister David Cameron of inaction.
The UK-based campaign Brandalism claimed responsibility for the adverts, saying in a statement that it hoped to “highlight the links between advertising, consumerism, fossil fuel dependency and climate change”.
Here is a look at some of the group's work.

$36b spent on outdoor advertising globally every year to promote unsustainable consumerism. Time for #Brandalism pic.twitter.com/pAyZhiwJ3Y

Dear @BrandalismUK, thank you for making your artful voices heard all around #Paris. What you are doing is beautiful pic.twitter.com/jpmX49E0ZO

If you're at the top of the human pyramid, don't look down @beastmastertv #COP21 pic.twitter.com/QeerAAcgpJ

Look closer at the ads in Paris bus stops this weekend for work by artists including @lilymixe #COP21 pic.twitter.com/nLYhDqo7lD

See a collection of the advertisements in the video below: