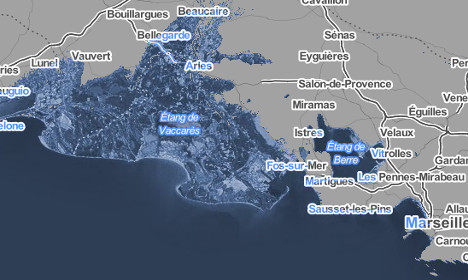 The organization Climate Central has produced a global map which forecasts how coastlines will change due to global warming.

The organization is concerned by the impact of rising sea levels as a result of global warming, saying the rate is only increasing as is the risk of drastic floods and surging seas causing widespread destruction.

Their map shows the areas of the world most at risk and will become reality between now and 2200 if global temperatures increase by 2C or 4C.

As the maps below suggests, the impact could be particularly dramatic on the French coastline, with the areas in mid-blue representing those which will be lost to the sea and the oceans in the coming decades.

The Gulf of Morbihan on the southern coast of Brittany would be particularly badly hit as would the Loire estuary, with the cities of Nantes and Saint-Nazaire exposed to the rising waters. The entrance to the Channel Tunnel might need more than a few sandbags considering it would be totally submerged, as would the towns of Calais and Dunkirk. Our great-great-grandchildren might need to dig a longer tunnel to get across the Channel – a much longer one, and probably a few new ports.

The mouth of the River Somme will have crept inland to the town of Abbeville, which currently stands around 20km away. The Cotentin Peninsular in Normandy would lose a lot of its land to the sea and with it some of the famous World War Two battle sites, with the map suggesting the town of Carentan could be underwater. The main threat in the south is around the western Mediterranean coast to the west of Marseille. The coast of Pyrénées-Orientales and Languedoc-Rousillon will recede dramatically, but it's around the Etang de Vaccares that the waters of the Med will soak up the most land with the town of Arles ending up pretty much sumerged. The Atlantic coast would be severely altered, with the Gironde Estuary widening dramatically and leaving part of the city of Bordeaux looking like Atlantis. Libourne would also be affected as the Dordogne and Garonne river beds grow dramatically. So much work has gone in to returning the famous island of Mont-Saint-Michel to the sea and restoring its natural maritime environment, that really it would have been cheaper just to wait for sea levels to rise.