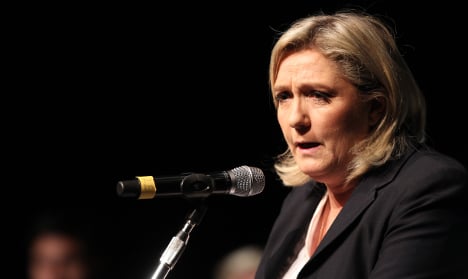 Marine Le Pen. Photo: AFP
As Prime Minister Manuel Valls called the party a “menace to the economy” and business leaders warned of the “ruin” it could cause, two main newspapers in the north launched an unprecedented campaign to stop its leader Marine Le Pen taking control of the region.
La Voix du Nord daily and its sister paper Nord Eclair ran a second day of attacks on Le Pen and the party Tuesday, questioning their competence to rule the Nord-Pas-de-Calais-Picardie region.
Articles headlined “Marine Le Pen and the Front are not who they say they are” and “Who are the members of the National Front really?” cast doubt on the party's ability to govern the depressed region, once a Socialist stronghold.
Le Pen, who looks set to win the region — France's second biggest — in the two-round vote which ends on December 13, reacted with fury to the “scandalous” attacks.
She branded the four pages dedicated to the party she inherited from her father, Jean-Marie Le Pen, little more than “tracts” in support of the ruling Socialist party.
“We shouldn't be surprised,” she shot back, “it's payback for the nine million euros ($9.5 million) of subsidies they (the newspapers) have got from the Socialists during their mandate.”
French regional newspapers, which outsell their national counterparts, rarely take a strong editorial line in the run-up to elections.
But La Voix du Nord — which refuted the claims that it was in the pay of the National Front's rivals as “counter to the truth and the facts” — accused the Le Pen family of “nepotism” and running their party like a family business.
'Economic danger'
With Marine Le Pen's 25-year-old niece Marion Marechal-Le Pen also ahead in the race for the vast southeastern region that includes the French Riviera, Premier Valls claimed the party could be “pushed back if everyone does their duty” and goes out to vote.
Latest polls also show the anti-Muslim and anti-immigrant party, which has never before won a region, in a close battle for two others, Normandy in the northwest and Burgundy and Franche-Comte in the east.
“I don't bow down before these polls, the best way to show the polls are wrong is to mobilise the electorate,” he added.
Valls slammed the party, which wants to pull France out of the euro, as “an economic menace”.
“The Front does not love France, and it is conning the French including on terrorism,” he told Europe 1 radio, insisting that the party had voted against a recent law to strengthen the hand of the intelligence services.
The head of the Medef employers' group, Pierre Gattaz, also weighed in against the party, saying it was “an economic danger which could bring the country to its knees, ruining those the Front are appealing to — pensioners, workers and young people who see their future stymied.”