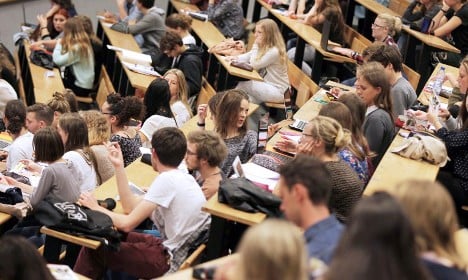 Photo: AFP
France's capital continues to outshine other world cities, at least according to a study published on Tuesday by British education company Quacquarelli Symonds (QS).
Judged over five main criteria – university rankings, student mix, desirability, employer activity, and affordability – Paris edged out other top cities like Melbourne, Tokyo, Sydney, and London to finish in top spot for the fourth year running.
But could the French capital's reputation be tarnished after terrorists killed 130 mostly young people  – many of them students – out and about in Paris?
Le Monde newspaper ran with the headline “Paris remains the world's top student city… for now“, suggesting the top spot may be out of reach in the future as France struggles to recover from the devastating attack.
'Some students have left early'
However Tim Rogers, Director of Enrollment Management at The American University of Paris, told The Local that he wasn't so sure there would be long-term effects from the terror.
“We're still very close to the attacks and I'm not sure people have quite made their minds up yet,” he said.
“We've had a small number of students choose to leave early, either because they've felt uneasy or their parents have had concerns, but the clear majority of students have chosen to stay put and finish the semester.” While he said the university may see drop outs – particularly with non-degree study abroad students – he predicted that prospective international students will “continue to focus on the city as an excellent destination”.
The university – which is completely international – has made sure to support current students and their families, using the attacks and the responses from Paris as classroom discussions.
When asked if Paris remained an attractive option, Rogers responded: “It's a resounding yes”
“Parents, students and partner universities from all over the world have told us these attacks won't change their plans of coming to Paris – sending us their children and students to benefit from the extraordinary experience that Paris and AUP offers,” he said.
Le Monde reported that other universities with high percentages of foreign students – such as Sciences Po – have only seen a handful of students dropping out, with experts predicting no real long-term effects.
SEE ALSO: How to live on a student budget in Paris

Meanwhile, those who have already come to Paris to study don't look like changing their mind either, at least not according to Stéphane Favré, a 24-year-old who came to the capital to study at the Business School of Institut Mines-Télécom.
“I haven't heard of anyone who wants to leave just because of the terror attacks,” he told The Local.
“And those attacks won't affect my decision either, I'm not afraid to stay here in Paris.”
Favré, who was in the Stade de France stadium when three suicide bombers blew themselves up outside, admits that his family in southern France's Grenoble have expressed their concern, however.
“My father was worried, especially knowing that I was in the stadium, and he is afraid about the fact that I go to restaurant terraces at night. But he doesn't explicitly tell me I should leave Paris.”
The Frenchman added that if a foreigner were to ask whether it was safe to come to study in Paris, he wouldn't hesitate.
“I would tell them to just come, for sure. Yes, life has changed a bit since the attacks, but it's still a wonderful city.”
READ ALSO: Studying in France – what you need to know

And indeed, those who do come to Paris to study have plenty to enjoy.
Tuesday's study praised Paris for its high concentration of internationally ranking universities. Boasting 18 universities featured in the QS World University Rankings, it has more world-leading institutions than any other city on the planet except for London, which has 19.
It singled out elite Parisian universities such as ENS Paris, Ecole Polytechnique, ParisTech, Sciences Po Paris, Université Paris-Sorbonne (ParisIV) and HEC Paris, noting that Parisian graduates are hot property for employers across Europe.
The study noted that while Paris is indeed an expensive place to live, the relatively low tuition fees mean that it turns out to be rather an affordable option when compared to other popular option.
And besides, what better place to be a broke student than Paris, which QS points out is “one of the world’s most historic, culturally vital and beautiful cities”.
But be warned – it's not all good news.
Recently classrooms in French universities have been overflowing, students have protested a serious lack of funding, and France on the whole finished last in a ranking of international student satisfaction in Europe for the third year in a row.
READ ALSO: The troubles with French universities laid bare