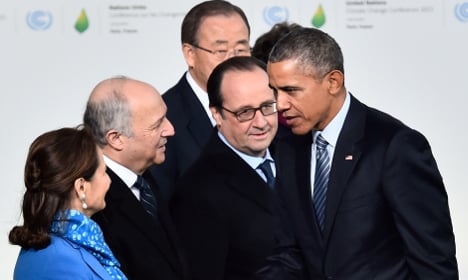 Heads of state and government from 150 countries opened the biggest-ever climate summit Monday in Paris, tasked
with inking an historic deal to stave off disastrous global warming.

“Through multilateralism we can show to the world that we can work together against climate change and against global terrorism,” said the talks' outgoing president, Peru's environment minister Manuel Pulgar-Vidal, two weeks after
jihadist attacks killed 130 people in the French capital.

The summit kicks off nearly a fortnight of talks intended to end two decades of international bickering with a pact that would limit emissions of the greenhouse gases blamed for climate change.

Some 150 world leaders, including from China, India, Russia and the US, will converge in the north of Paris for the talks in a venue bristling with security and protected by some 2,800 police and troops. Negotiators have vowed to forge an ambitious deal to honour the 130 people killed in the November 13 bombing and shooting attacks that shook the French capital.

They will hold a minute of silence to remember the victims when the event officially opens at 11:00 am (1000 GMT).

“The fate of humanity is at stake in this conference. After the attacks in France, we have to deal with the urgent priorities and respond to the terrorist challenge but also act for the long term,” French President Francois Hollande said.

In an interview with French daily newspaper “20 minutes”, Hollande said leaders would meet in Paris “to reaffirm their solidarity with France” and to “assume their responsibilities in the face of the warming of the planet”. “History will judge the heads of state and government harshly if, in December 2015, they miss this opportunity.”

Scientists warn that unless action is taken soon mankind will endure ever-worsening catastrophic events, such as droughts that will lead to conflict and rising sea levels that will wipe out low-lying island nations.

The Paris attacks appeared to have galvanised many world leaders in their determination to stand up to terrorism and push on with the climate struggle.

Several world leaders have been to pay tribute to the victims, and US President Barack Obama's first act after touching down in the early hours of Monday was to visit the scene of the worst carnage at the Bataclan concert venue.

The summit is “an opportunity to stand in solidarity with our oldest ally… and reaffirm our commitment to protect our people and our way of life from terrorist threats,” Obama said in a Facebook post before flying to Paris. The United Nations has hosted annual summits to tackle the vexed global warming issue since 1995, but all previous efforts have foundered, primarily due to deep divisions between rich and poor nations.

Many poor nations insist rich countries bear the most responsibility for tackling the problem, because they have burnt the most fossil fuels since the Industrial Revolution on their way to prosperity.

But the United States and other developed nations insist more must be done by China, India and other emerging countries, which are burning increasing amounts of coal to power their fast-growing economies.

Potential stumbling blocks in Paris range from finance for climate vulnerable and poor countries, to scrutiny of commitments to curb greenhouse gases and even the legal status of the accord.

Still, important progress has been made ahead of the meeting. One of the key successes has been a process in which 183 nations have submitted voluntary action plans on how they would tackle global warming. Two degrees C is the threshold at which scientists say the worst impacts of global warming will be inevitable.

The US and France said 20 countries will also pledge on Monday to double their investments in clean energy.