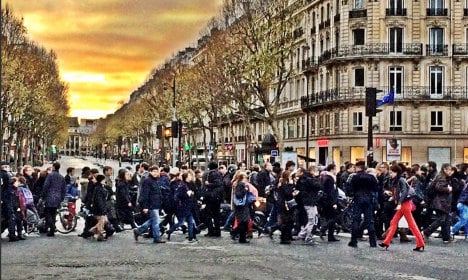 Commuters cross an eerily empty Boulevard Malsherbes on Monday morning. Photo: The Franco British Chamber
Paris hasn't exactly ground to a stand-still as some may have expected
In fact, it's actually coping quite well, no doubt thanks to the extensive preparations that come when you're hosting heavyweight politicians like US President Obama, Russian President Vladimir Putin, and Chinese President Xi Jinping.
Here is a run down of the changes in the French capital.
Public transport
Authorities announced that public transport would be free of charge in Paris for Sunday and Monday, in an attempt to persuade motorists to leave their cars at home.
Police even said that people should avoid taking the Metro at all “unless necessary”.
Perhaps thanks to the warning, the Metro was largely empty on Monday morning, so much so that Le Parisien newspaper ran a gallery with over 20 pictures showing half empty carriages on the morning commute.
Metro lines will be bolstered in real time to accommodate any potential increase in commuter traffic, noted the city's public transport chiefs RATP. For live updates, see their site here (in French) A police officer stands guard over a closed section of the A1 highway. Photo: AFP

If you really have to drive, be warned that the A1, the A16 and sections of the western périphérique ring road are particularly affected.

The map below gives idea of which roads have been hit by the security measures. A more detailed map and key is available here.

Extra police
The conference itself is being patrolled by at least 100 UN security personnel and 300 private security guards.
France, meanwhile, has promised to deploy nearly 11,000 police for the summit, of which 8,000 police and gendarmes are to carry out border checks, with a further 2,800 deployed at the conference venue north of Paris.
The police have already been busy, arresting over 300 people on Sunday afternoon when anti-capitalist militants infiltrated a climate protest in central Paris. 'It's great for tourism'
Tourism chiefs in Paris insist the conference is a much needed boost for the French capital.
“It's the first time since the attacks that Paris will be on TV screens around the world for a positive region,” François Navarro, head of the Paris Region tourist board told The Local.
“It's the biggest event ever of this kind and this will be proof that we can hold it.”
Navarro said four and five star hotels to the north of Paris, near Le Bourget site and the Charles de Gaulle, are heavily booked up, but visitors shouldn't be put off from coming to Paris over the next two weeks with plenty of accommodation available.
Eiffel Tower turns green
And lastly, on a more artistic precursor to the talks, the Eiffel Tower was turned green on Sunday as part of an art project that will see “virtual trees” grow on the landmark to support reforestation.
While perhaps not as striking as the blue, white, and red light show from after the November 13th terror attacks, the green is still sure to attract some extra attention for the Iron Lady. 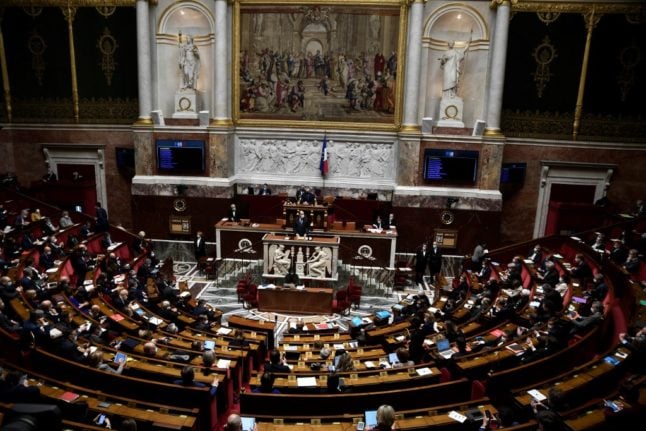