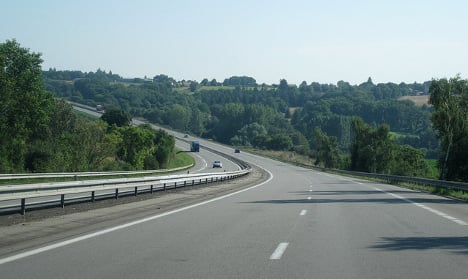 The boy was left behind on the A11 highway, a portion of which is seen above. Photo: European Roads/Flickr
The woman left the boy behind after stopping for a toilet break on the A11 highway between Nantes and Angers in western France on Saturday.
She then asked the boy if he needed to make visit the toilet too, but he declined, reported the La Maine Libre newspaper.
However, apparently after a change of heart, the boy left the car in search of the toilets.
Meanwhile, his mother returned to the car and drove off.
She told the paper that she'd mistakenly thought the boy was in the back seat, but it turned out that it was only his jacket.
Back at the roadside, the six-year-old decided to take matters into his own hands and began trying to hitch hike home.
Concerned motorists alerted police – as did the boy's mother after realizing her boy wasn't in the car with her.
Luckily, the pair were reunited after police arrived on the scene quickly and the mother returned to gather her wayward son.
The occurrence marks the second time in recent months that a French child has been forgotten at a layby.
In August, a family on their way to the French Riviera drove more than 150 kilometres before realizing they had left their three-year-old daughter in a motorway rest area.
The family only twigged when an alert was issued on French radio, police officers said.