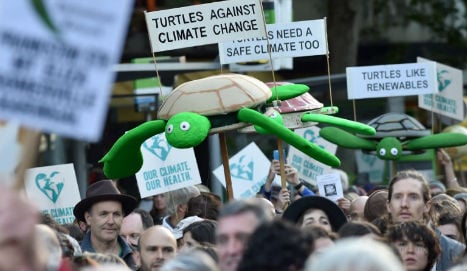 Marchers in Melbourne call for action to avert climate disaster. Photo: Paul Crock/AFP
From Australia to New Zealand, the Philippines, Bangladesh and Japan,people rallied at the start of a weekend of popular protests pleading for world powers to overcome the logjams when the UN climate summit officially
opens in the French capital Monday.
“Protect our common home,” declared placards held aloft as thousands gathered in Melbourne.
Some 150 leaders including US President Barack Obama, China's Xi Jinping, India's Narendra Modi and Russian President Vladimir Putin will attend the start of the Paris conference, which is tasked with reaching the first truly
universal climate pact.
The goal is to limit average global warming to two degrees Celsius (3.6 degrees Fahrenheit), perhaps less, over pre-Industrial Revolution levels by curbing fossil fuel emissions blamed for climate change. If they fail to do so, scientists warn of a world that will be increasingly inhospitable to human life, with superstorms, drought, and rising sea levels that swamp vast areas of land.
On the eve of Saturday's protests, French President Francois Hollande, host of the November 30-December 11 talks, warned of the obstacles ahead for the 195 nations seeking new limits on heat-trapping gas emissions from 2020.
“Man is the worst enemy of man. We can see it with terrorism,” said Hollande, who spoke after leading ceremonies in Paris to mourn the victims of the November 13 bombing and shooting attacks that sowed terror in the French capital.
“But we can say the same when it comes to climate. Human beings are destroying nature, damaging the environment. It is therefore for human beings to face up to their responsibilities for the good of future generations.”
The French leader called for “a binding agreement, a universal agreement, one that is ambitious.”
But he also spoke of fears that a handful countries — which he did not name — may stymie consensus if they felt the deal lacked guarantees.
Potential stumbling blocks in Paris abound, ranging from financing for climate-vulnerable countries to scrutiny of commitments to curb greenhouse gases and even the legal status of the accord.
The last attempt to forge a global deal — the ill-tempered 2009 Copenhagen summit — foundered upon divisions between rich and poor countries.
“We must do our utmost to avoid the blocking of an agreement because of irreconcilable principles,” French Prime Minister Laurent Fabius said in an interview with a handful of international newspapers published Saturday.
On a positive note, billions of dollars in environmental aid were revealed Friday.
In Ottawa, the Canadian government announced climate funding of 2.65 billion Canadian dollars ($1.98 billion. 1.87 billion euros) over the next five years, while the 53-nation Commonwealth bloc agreed to set up a
billion-dollar “Green Finance Facility” for environmental projects.
Protest organisers say they expect hundreds of thousands of people to take to the streets overall this weekend with further rallies planned in Johannesburg and Edinburgh Saturday, while similar events were set for Sunday
in Seoul, Rio de Janeiro, New York and Mexico City.
In Paris, French authorities cancelled two demonstrations following the onslaught by gunmen and suicide bombers which killed 130 people at restaurant terraces, a concert hall and the national stadium on November 13.
French authorities placed 24 climate activists under house arrest using state of emergency powers declared after the Paris attacks.
Activists now plan to create a two-kilometre (1.2-mile) human chain along the original march route on Sunday. They will break the chain as they pass the Bataclan concert hall, where the worst violence claimed 90 lives, as a mark of respect to the victims.
Protesters also plan to leave scores of shoes on Place de la Republique square to symbolise the thousands left frustrated in their plans to march.
One pair of shoes will be placed on behalf of Pope Francis, inscribed with his name and the name of the Papal encyclical he issued earlier this on the threat of global warming.
Around the world, protesters declared their solidarity with Paris activists who were unable to rally with a social media campaign tagged #march4me.
In a sign of the urgency of the talks ahead, the start of the climate negotiations themselves, conducted by rank-and-file bureaucrats, have been brought forward to Sunday on the eve of the official opening.
The Paris conference will gather some 40,000 people, including 10,000 delegates from 195 countries, plus journalists, observers, scientists, exhibitors and visitors.
About 2,800 police and soldiers will secure the conference site, and 6,300 others will deploy in Paris.
Obama has urged world leaders not to let a recent string of extremist attacks around the world deter them from coming to Paris, where questions of world security are likely to intermingle with climate on the conference agenda.
This week, the UN's weather body said the average global temperature for the year 2015 is set to touch the halfway mark at 1 C.
And analysts say voluntary carbon-curbing pledges submitted by nations to bolster the Paris pact, even if fully adhered to, put Earth on track for warming of 3 C. 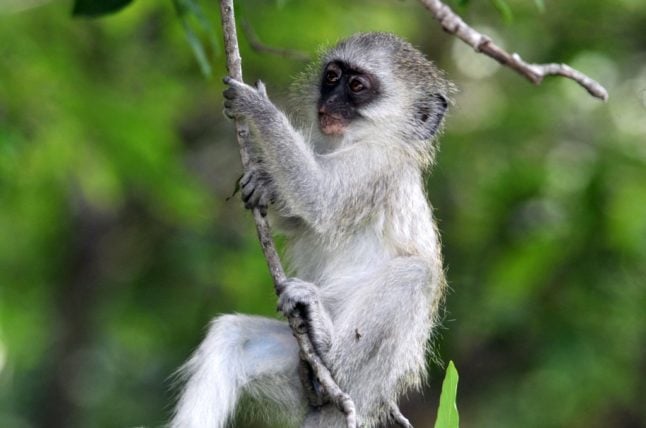