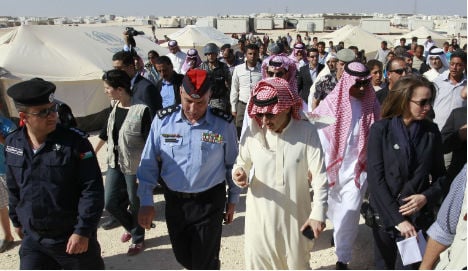 Saudi billionaire Prince Waled Bin Talal visits Jordan's Zaatari refugee camp last year. Photo: Khalil Mazraawi/AFP
“I'll say it again, Europe cannot accept all the refugees coming from Syria. That's why we need a diplomatic, military and political solution in Syria,” Valls said Friday evening.
“Every country must play its part; I'm thinking particularly of the Gulf states,” the prime minister said during a discussion with residents of Evry on the outskirts of Paris, focusing on the response to the attacks which rocked
the capital two weeks ago.
Most of the roughly four million Syrian refugees who have fled their country since civil war broke out have travelled to neighbouring Libya, Jordan or Turkey.
But Saudi Arabia, Qatar, UAE and other Gulf states have remained closed to them, while Europe struggles to adopt a common policy towards the hundreds of thousands of refugees who are arriving at its borders.
Unless the borders of the EU are properly controlled “we are going to see a humanitarian disaster in the Balkans this winter and Europe is going to close up again,” Valls warned.
And while the prime minister rejected any link between genuine refugees and terrorism, he also highlighted the danger of terrorists being allowed into the EU alongside those fleeing war — as seems to have been the case with some of those responsible for the Paris attacks.
“All it takes is for a few terrorists to slip in with the influx of refugees, and the people of Europe are saying, 'Wait, if terrorists are getting in along with refugees, that means any refugee could pose a threat',” he said.
More than 800,000 migrants have arrived in Europe by sea since the beginning of the year, with the majority coming from the Middle East.