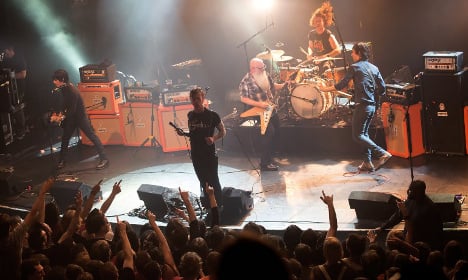 Band Eagles of Death Metal, whose lyrics were criticized by the priest for 'invoking the devil'. Photo: AFP

Cardinal Philippe Barbarin, the archbishop of Lyon, public announced the dismissal in a statement on Friday.

“Following the publication of an opinion column by Father Hervé Benoît, and after taking the time to meet and listen to him, I have decided, along with his bishop, to relieve him of his pastoral duties in the diocese of Lyon,” he said.

Barbarin also urged Father Benoît to “withdraw to an abbey to take time to pray and reflect.”

The priest's controversial column appeared on the traditionalist website Riposte Catholique on November 20th, one week after the attacks on Paris which killed 130.

Benoît strongly criticized the California rock group, Eagles of Death Metal, who were playing at the Bataclan concert hall, where 89 people were killed, but he also spoke out against the band's audience, comparing the victims to their murderers.

“Look at the photos of the audience moments before the drama,” the article read. “These poor children of the lefty generation, in an ecstatic trance … they are the living dead.

“Their killers, these zombies, are their Siamese twins.

“It’s so obvious!… Same childishness, same lack of culture…Violence, sex, drugs, making a racket … you invoke the devil for a laugh? He will take you seriously.”

Benoît also appeared to equate the deaths of those gunned down by terrorists with abortion, saying: “130 deaths, that’s awful! And 600 deaths, what is that? That’s the number of abortions in France on the same day. Where is the horror?”

The priest had been practising as chaplain at Lyon’s famous Fourvière Basilica, but has now been officially relieved of his duties.

Barbarin commented that Christians must “always do their utmost to maintain peace and harmony founded on justice between men.”

A petition on the site “Change.org” demanding the priest be deposed had reached over 42,000 signatures by the time of Friday's announcement.

The organizers of the petition wrote: “There's a lot of talk about extremism linking it to Islam, let's not forget that it exists in all religions”.