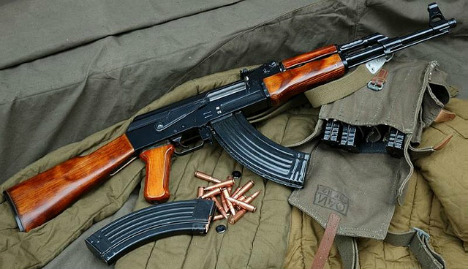 The man from Baden-Württemberg sold four assault rifles in early November after they were ordered over the internet, Bild reported based on documents from the Stuttgart prosecutor's office.

The weapons in question are said to be two Chinese-production AK-47s and two Zastava M70 rifles (copies of the original Kalashnikov) from the former Yugoslavia.

According to Bild, German police on November 16 arrested a 34-year-old man named Sascha W. from the southern city of Magstadt on suspicion of the illegal weapons trade.

The suspect is accused of having hawked the weapons on Darknet – a hidden network used for both licit and illicit ends – using the name “DW Guns”.

Four emails on his smartphone are said to prove that the man sold the weapons to “an Arab in Paris.” Bullet impacts in the streets near the Bataclan concert hall in central Paris. Photos: Oliver Gee

According to Bild’s sources, French investigators believe that the weapons were then used by the Isis terrorists in the Paris attacks on November 13th which left 130 people dead.

The weapons dealer is now in custody in Stuttgart.

During a raid at the suspect's house, police also found 16 other firearms, Bild said.