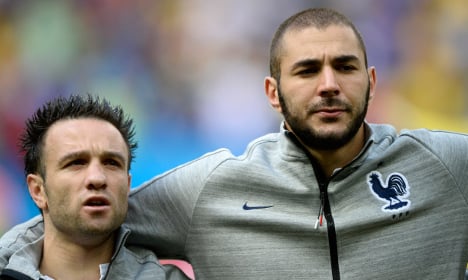 In his first public comments on the scandal that has torn apart the French national team, Valbuena told Le Monde newspaper he was “very, very, very disappointed” at the actions of Benzema.

Twenty-seven year-old Real Madrid star Benzema has been charged with complicity to blackmail Valbuena over the tape.

Le Monde asked Valbuena whether Benzema had just urged him to meet the blackmailers. “Incite, that means 'you will have to pay' indirectly,” Valbuena replied.

“He was not aggressive in his manner of talking, he did not talk about money concretely, directly. But when someone insists that I meet someone …hmmmm.

“I have never met anyone who is going to destroy a video for free just because they love me! You shouldn't treat people like idiots,” Valbuena said.

The scandal has rocked France's campaign for the European Championships which the country will host next year. Benzema has been banned from meeting Valbuena and neither were chosen for recent France games.

Four men, including a friend of Benzema, Karim Zenati, have been charged and detained over the blackmail using the stolen sex-tape.

Benzema is alleged to have approached Valbuena about the images at a France national training camp on October 5th. The 31-year-old Lyon midfielder said it had been hard to accept the implication of a France teammate in the scandal.

“I am very very very disappointed and I can only note that my relations with Karim were not as sincere as he makes out,” he added.

According to investigation sources, Benzema has admitted to police that he was to act as an “intermediary” between Valbuena and one of the blackmailers who was a childhood friend of Benzema.

“When I went to the first (police) questioning I had absolutely no idea that Karim Benzema was involved,” he told Le Monde.

'I have a daughter'

Valbuena said Benzema had asked him to deny Benzema's involvement in a telephone call when Lyon were in Russia preparing to play against Zenit St Petersburg in the Champions League on October 20th.

“He said to me 'Mat my name has come out, what is all this chaos. I can't be in all these affairs.'

“I said to him: 'Listen Karim, its nothing special, you did nothing, there's no worry'. But I told myself it's strange that he wanted me to meet this person.”

According to Valbuena, Benzema then went on to ask him to deny his involvement. “This is hot, it is going to become mad, I have a daughter and everything,” he quoted Benzema as saying.

Valbuena had earlier made a statement saying that another former teammate, Djibril Cisse, was not involved in the affair even though he had also been questioned by police about the sex-tape.

“At that moment, I knew that the big difference between Djibril and Karim was that Djibril had never asked me to meet someone. But Karim, he did,” said Valbuena.

The blackmail case began in June, when Valbuena lodged a complaint with police after being telephoned by a man who said he had the sex tape.