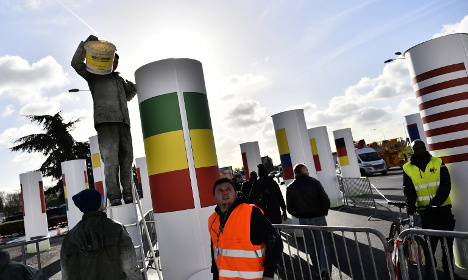 From Melbourne to Tokyo and Manila to Los Angeles, some 2,000 events of all sizes are planned in about 100 nations in a bid to push leaders to craft a pact which will keep Earth from overheating.

However, following the terror attacks in Paris that killed 130 people, authorities in the French capital banned citizens' marches scheduled for Sunday – the day before the summit officially opens – and for December 12th, the day after it closes.

Activists have instead planned to link hands on Sunday in Paris creating a two-kilometre (1.2-mile) human chain along the cancelled march's route, while also passing in front of the Bataclan concert hall, where the worst violence occurred. In honour of the 90 people killed there on November 13th by jihadist gunmen, demonstrators will break their human chain while passing in front of the venue.

“We will turn out in large numbers in a powerful moment of support for climate justice, democracy and peace, and also pay tribute to the victims of the attacks,” said climate activist group Alternatiba.

Organizers in Paris also plan to place scores of shoes at the Place de la Republique – a city square and rallying point – to represent those prevented from marching by the official ban.

France said Wednesday it will deploy nearly 11,000 police for the climate summit, which aims to seal a deal to keep global warming from rising 2C (3.6 degrees Fahrenheit) above pre-19th century levels.

Interior Minister Bernard Cazeneuve said 8,000 police and gendarmes would be posted to carry out border checks and 2,800 deployed at the conference venue at Le Bourget north of Paris.

He said 120,000 police and troops had already been mobilized across France since the attacks, which have triggered a state of emergency that will remain in place until February.

More than 150 heads of state and government are due to attend the start of the UN conference, leading Paris authorities to shut down major roads into the
capital on Sunday and Monday and make public transport free of charge. The official start is on Monday but negotiators have said they will begin their haggle a day earlier to try to gain as much ground as possible.

The heavy security in Paris has begun to draw criticism from certain NGOs, which have planned to use public events to beat the drum for concerted political action against global warming.

However, elsewhere in the world organizers are expecting large crowds at their rallies, including some 30,000 in Melbourne on Friday and 20,000 in Manila on Saturday. More than 5,000 cyclists are expected to demonstrate in Mexico City, with large marches also planned in Los Angeles, Austin, Texas and in Washington and New York this weekend.

UKRAINE
Thousands gather in Florence and Paris to show support for Ukraine
Url copied to clipboard!